Under normal circumstances the club organises several races each year — historically Run Macc Fest being the biggest in terms of entrants and money raised for charity. Results and reports for the club-organised races are given in Race Results below.

The club has a strong belief in supporting the local community and currently donates all net profits (after costs) from each of these races to local charity — we even openly show our race costings so that participants see exactly where the money goes!  Macclesfield Harriers & A.C. is one of the few clubs to do this.

In addition, club members currently act as race organiser for other local fell races including the Bollington 3 Peaks and Rainow 5 races (in May), the Wincle Trout Run (June), the Langley fete fell race (July) and the Andrew Heywood Memorial Windgather Fell Race (October) – whilst these are NOT club races the club provides support for them in the form of volunteer marshals, timekeepers and also allows use of the club race signs. The club also helps out at other local events such as the Tegg’s Nose fell race (part of the annual sheepdog trials in August) and Bosley Fell Race. 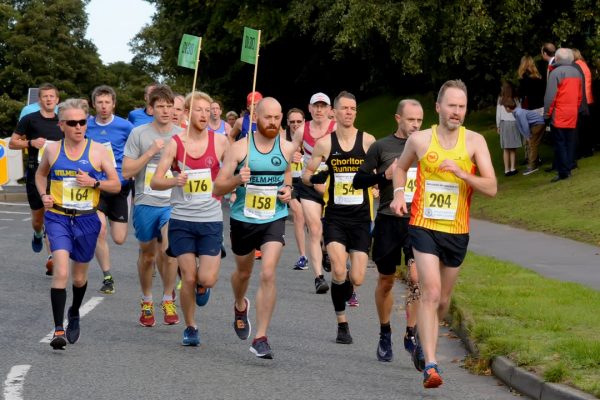 Races organised by the club – click each race for details

Usually the first Saturday in November, is a hilly road race that is not really 7 miles any more and no longer goes through Langley, but still has great cakes!

Open to everyone with a Fun Run, 5K, 10K and Half Marathon. Usually held on the last Sunday in September – hopefully to return in 2022.

This is an internal club event held each December – a classic ‘fell’ route around the local area ending with beer and sandwiches in the local pub.

Races that the club supports (volunteers, signs etc) – click on each race for details

A challenging fell race around the Goyt Valley

A five mile circuit around the Dane Valley with the promise of a Trout as your prize!

A challenging 9km trail/fell run around Gun Hill with a few ups and downs.

A challenging route around the ‘3 Peaks’ of Bollington (Kerridge, White Nancy & Nab Hill) starting end finishing at a brewery. All proceeds to Buxton Mountain Rescue.