The annual club fell handicap is an internal club event held each year sometime in December (2nd or 3rd Sunday). It is always a popular club race, is great fun and opportunity to bring many fell and trail runners together for a festive social.

The start times are staggered (anything from 8.45am to 10.15am) based on an intricate handicap system.

The aim is that everybody finishes about 12.45pm ready to retire to the St Dunstan Inn for soup, sandwich, beer and prizes. The route is about 14 miles, 2,500′  starting in Langley taking in Macclesfield  Forest, Shutlingsloe, Cumberland Clough, Cat & Fiddle, the infamous ‘sweetie tree’, Shining Tor, Lamaload, Walker Barn & Tegg’s Nose viewpoint.

NOTE: This is a winter race and the weather historically has been at times pleasant and at other times harsh, cold, icy and snowy. Participants should be familiar with the course and competent at handling themselves in what can be challenging conditions. Full winter kit including map and compass are required in all weather..
If you are unsure about any aspect of this event please contact the fell and trail section leads to have a chat – assuming you have the kit, can handle the terrain and distance they will pair you up with somebody more experienced. 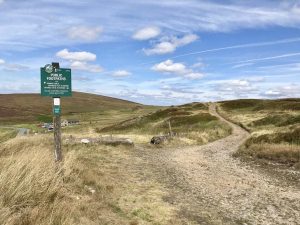 The full event details are on the Fell Section Facebook page along with start times for all runners. Please read the ‘rules’ carefully!

Race Day Registration and start are at the St Dunstan’s Inn (Langley).

The route heads off into Macclesfield Forest and participants must find there way to the top of Shutlingsloe then up to the Cat & Fiddle. From the Cat the routes heads off towards Shining Tor but before that is the infamous ‘Sweetie Tree’ cunningly hidden at the top of Shooter’s Clough (SK 000 736) where a bag of chocolates will be found – take one, eat it and keep the wrapper as evidence you were there (there is a 20-30 minute penalty for missing this out). After the tree head for Shining Tor, out towards Andrew’s Edge, down to Lamaload, on to the Water Treatment Works and then along to Walker Barn via field paths. After Walker Barn the next stop is Tegg’s Nose viewpoint before dropping down to Tegg’s Nose reservoir to the finish line.

Tradition is for a soup and sandwich in the St Dunstan’s Inn afterwards for post run banter and prizes.

Phil Cheek (along with lots of help) has organised this event for many years. Full kit is required and for less experienced runners pairing up is advised. 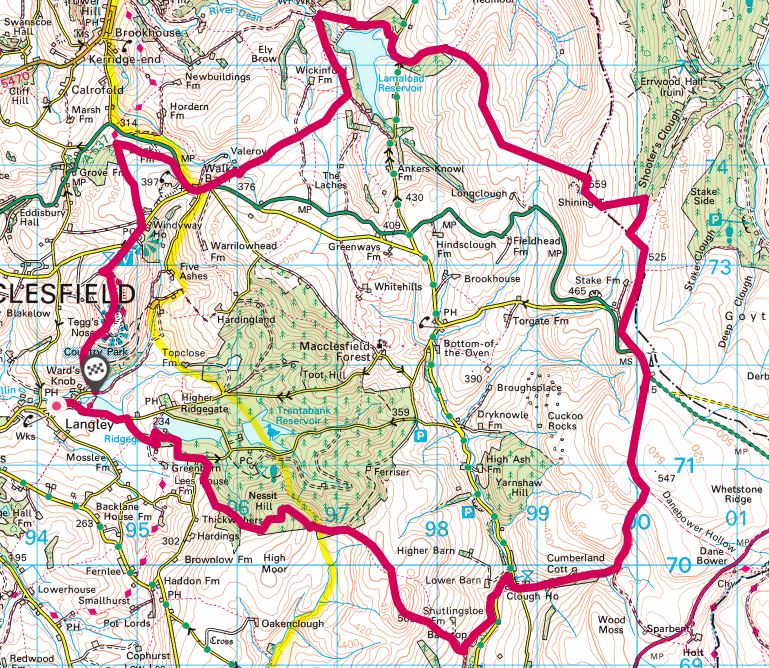 NOTE for 2021: The route is subject to late changes due to disease management work around Lamaload WTW – the diversion will be as shown below and will be confirmed at registration. 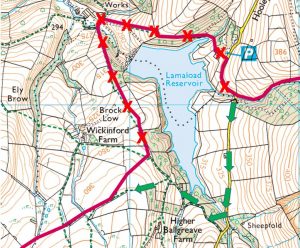 NOTE: For 2021 – the route has changed after Walker Barn to go via Brink Farm and the Gritstone Trail to Tegg’s Nose to avoid the dangerous road section.

History:  Early days the route started & finished at Tegg’s Nose top car park & went clockwise & did not visit the waterworks but came down to the other end of Lamaload & along the road to begin the climb to the Cat & Fiddle. One year there was a very icy descent to Clough House Farm & decided to avoid a repetition by reversing the route from then on – the route is now always anti-clockwise.  Also, for a number of years the route started and ended at Common Barn as start & finish for some years,which added distance & climb.

The route continues to evolve (for safety reasons) and from 2021 the road section from Walker Barn to Tegg’s Nose has been replaced by a slightly longer field path section through Brink Farm.

The Xmas Fell Handicap began in 1985 as a fun variant on our regular Sunday morning fell runs. Start & finish were in the top Tegg’s Nose car park (the coldest place on earth) where we enjoyed a brew & mince pies in what was then an open sided shelter.

In the early days, with only a dozen or so runners I was able to run, but as numbers increased I stopped taking part around the turn of the century.
The original route was similar to today`s, though a little shorter, running alongside Lamaload on the road & not visiting the sweetie tree. Initially we ran anticlockwise until one icy morning most of the field hit the deck(3 of us in a pile) descending Cumberland Cutt & it was lucky no-one got hurt. Since then we`ve taken this rocky bit uphill.

The 1st major route change was to put in the sweetie tree to get some true rough stuff in as various paths were ruined (sorry improved) on the rest of the route. Then we got to know Rona & moved the venue to her café at Common Barn, lengthening the route, adding some climb, but with the huge benefit of warmth, shelter & post-run grub.
More recently we moved to the St Dunstan`s, where we`ve been made very welcome & with the added benefit of more substantial food & a decent pint available.
Over the years we`ve only once had to postpone (due to deep snow, although a few folk made it to Common Barn for a run anyway) & of course cancel last year (2020 – COVID).

Sadly, times have changed & nowadays we have warning signs on the roads, numbers, marshals & kit checks, all unheard of in the early days.
You can see from the results sheet that over the years I`ve managed to get lots of people of varying ability in the frame. One year early on I remember climbing Tegg’s at the end with the whole field in sight on the climb.

A lot of folk have been regulars, though most of us who ran the early races (in our 40s already remember) can no longer do the distance. An exception is Mark McDermott who ran in the 2nd edition & was still out in 2019. Colin Ardron & Andy Addis ran from the start & were still at it until a few years ago, Andy did something like30 years in succession, including 1 year the day after he`d run a muddy 50 mile Round Rotherham race!

We’ve had bigger numbers than ever on recent runs, so while there`s demand & I can get the help needed we`ll keep this venerable institution going, if only for because I enjoy the pleas & bribes in search of better handicaps.