One of my favourite ‘teenhood’ memories was running with my Dad in our local road running club ‘The Red Rose Road Runners’. I was never one of the fast ones but just loved the feeling and banter within the group running from the local Leisure Centre through town until we reached the open roads of Longridge. A pair of blue Ron hills (complete with stirrups) and a tracksuit top (with a slight 1980’s sheen which proudly bore the red rose logo) and we were good to go.

30 years later and I’m signing myself up for the Spine Challenger. ‘Britain’s most brutal race’ the website proudly advertises. This challenging and technical section of the Pennine Way is a physically and psychologically demanding route that demands concentration, good physical fitness, resolve and respect’

Go on then, I feel like a challenge I thought to myself. What’s the worst that can happen? 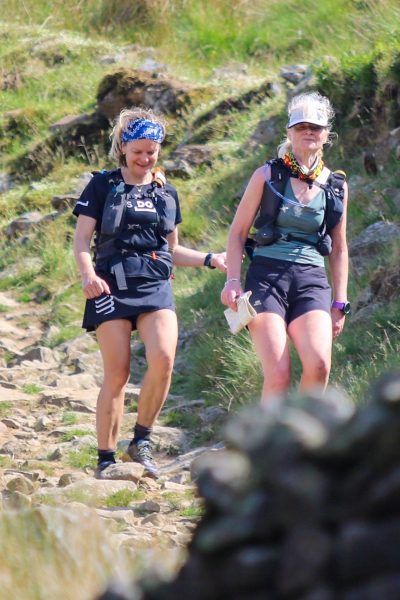 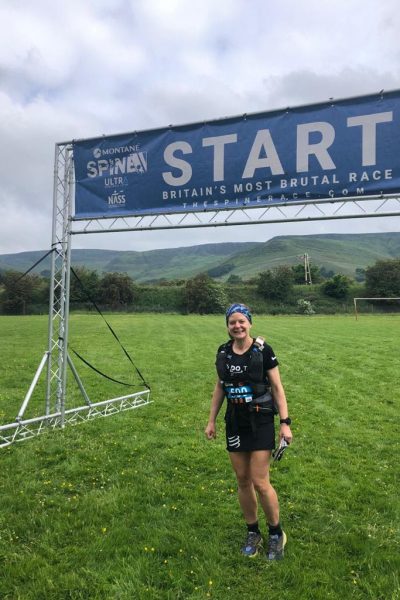 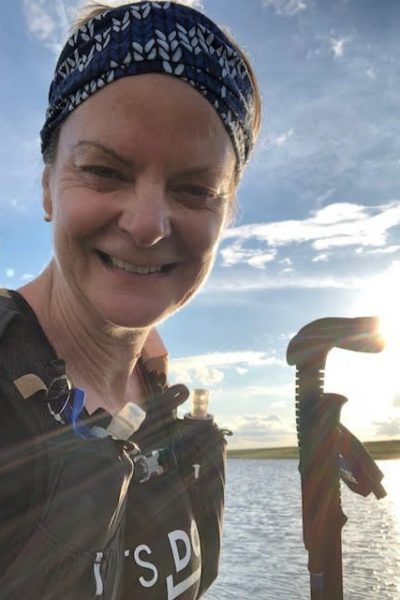 On the days leading up to the race I was met with open mouthed gasps and ‘why would you want to do such a think you crazy person’ whenever I mentioned to people what I was about to take on – all immediate alarm bells! Thankfully my partner Rob reassured me ‘you’ll be fine’ ‘all you need to do is just keep putting one foot in front of the other and you’ll be fine’ – Sounds pretty easy I thought.

My nav skills aren’t the most polished but I’ve heard the Pennine way is quite well sign posted with a little acorn so it should be fine.

The day of the race arrived. Kit checked passed after a kind man gave me his mug as mine failed due to its minute size (my attempt at saving weight to carry) and my running partner Emma had a map fail. ‘You two blonde girlies are on my radar’ one of the officials (half) joked.  Great.

As our 10.00am start time fast approached I was terrified. ‘What the heck have I done’ I kept thinking to myself. I can’t run fast and my legs feel like they are falling off every time I run more than 30+ miles (which isn’t very often!) Oh well I can’t back out now. I’m way too stubborn to do that! The countdown starts and off we go. Laughing nervously, I start the mammoth journey ahead. 108 miles… here we go!

The first 10 miles went well. One (small) mistake by us not believing one of the original old stone way signage and going the opposite way to what it was saying but we righted ourselves quickly with high spirits hoping our dot watchers hadn’t noticed the error. 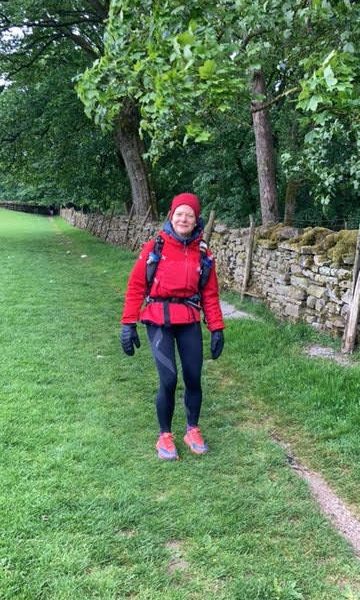 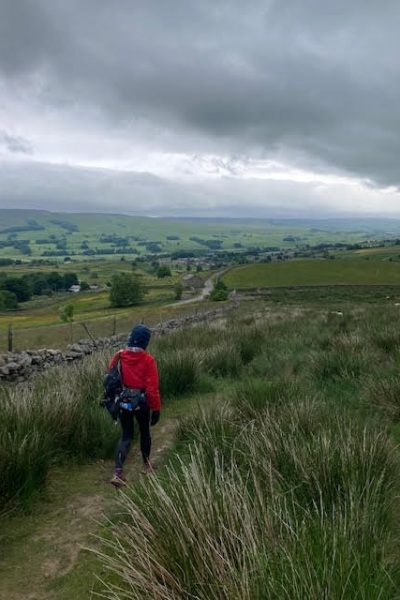 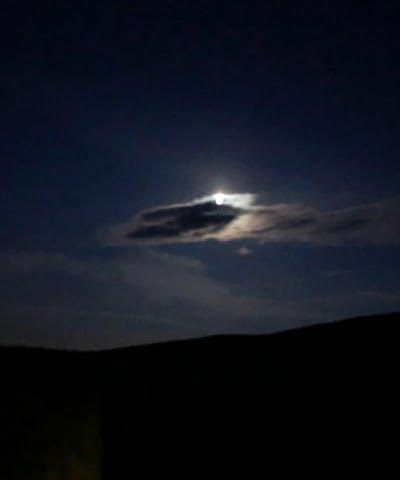 By mile 20, our Spine sprint colleagues started to overtake us. ‘Well done’ we exclaimed as they trotted past.

Day one went well. Other than an underestimation of water on my part we were in good spirits and met by various kind random strangers along the way who had rocked up with their campervans filled with water to re-fill any dehydrated runners’ flasks due to the unforeseen heatwave we had experienced that day. Something I will forever be thankful for.

We eventually reached Hebden bridge at 2.30am feeling weary and hungry. (after some bright spark had thought it funny to turn the directional signs around in town leading to the checkpoint) We were treated to the best chilli and rice I had ever eaten and a bed for the night (a 1.5 ft wide wooden pew) where I put my head down and slept soundly for a full hour.

I woke up to the most devastating news that my running partner Emma couldn’t continue. Her back had gone into spasms and had made the difficult decision not to carry on. The emotions I felt were heavy. How could I possibly do the rest of this by myself with another 68 miles to go! After a long think I decided to carry on. This time solo. I packed my bag and said my goodbyes and set off holding back the tears. Along the canal, up the narrow path ‘just follow the signs with the little acorn’ ‘I can do this’ I thought to myself.

Day two was an emotional one. The extreme highs and lows took me by surprise. But I kept going. I had to as there was no way I was going back now.

Three hours in I met a lady who was fast walking the whole Pennine way with her dog. If we all have a guardian angel, then she was mine that day. We chatted for hours travelling at a strong pace together.

We parted ways about 10 miles before Gargrave where she was camping for the night. This was where the lows really kicked in. Feeling deflated, I travelled down the canal tow path not realising I was going in the wrong direction where out of nowhere I heard two people running towards me and calling me to go back and it was down there pointing back to where I had come from. It was two runners from the race who had gone a half a mile out of their way (a mile in total there and back) to call me back and show me the right way. I was overwhelmed by their kindness, faith in humanity had been fully restored.

Whilst stocking up at the Co-Op in Gargrave feeling a bit worried about the solo night ahead, two lovely ladies I had met earlier in the day took me under their wing and insisted I grouped up with them. Another gesture I will be forever thankful for. We set off heading to Malham and Fountains fell, spirits once again high as the night closed in. By now it was 3am and had only survived on an hours sleep in the last 36 hours. All feeling a bit delirious, we decided to bivy down on the side of the track for a 15-minute power nap before tackling the infamous Pen Y Ghent. ‘Rather we do it with fresh legs’ we thought!

Looking back we must have resembled three turtles climbing up a huge rock. Slowly making our way up, in the dark and hoping not to slip. We eventually made it to the top to the most beautiful sunrise. One of those ‘life is good’ moments. It was on the way down when the sun was starting to rise fully when the hallucinations started. I had heard about them before but was still surprised to see a full line of 30+ people standing against a dry-stone wall. ‘woooowww did you see all those people’ I exclaimed?!!

We reached Horton in Ribblesdale and with now only 30 miles to go it seemed almost a doddle to get to the finish line after how far I had come. Only 10 park runs or a few Wednesday night Harriers Wincle runs tagged onto each other. Easy.

How wrong I was. Those last 30 miles were the hardest I have ever travelled. It felt like I was running barefoot on lego.

If I wasn’t so stubborn and so close to the end I would have quitted right there. But I kept going. Mind over matter. One foot in front of the other. Just keep moving forward – all the things I had been told to think when the going got tough I had to now put into practice. I think I cried most of this section. Especially when I received a message from my mum saying ‘your dad has been glued to his gadget (she isn’t the most tech savvy) dot watching you all weekend and we are both so proud of you. How far you have come since your red rose running days with your Dad hey!’ 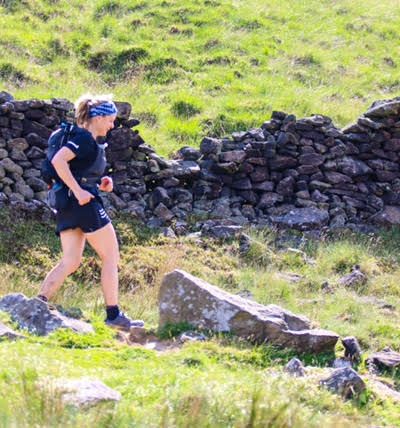 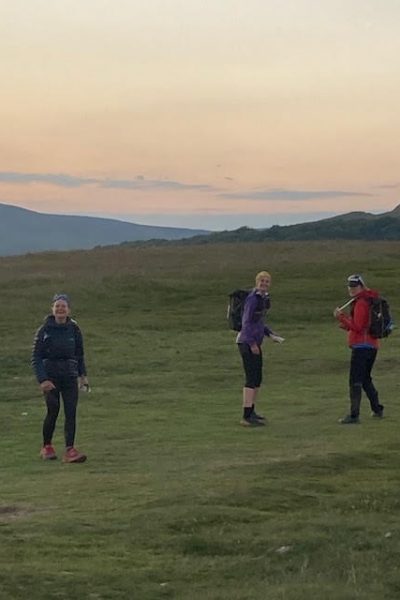 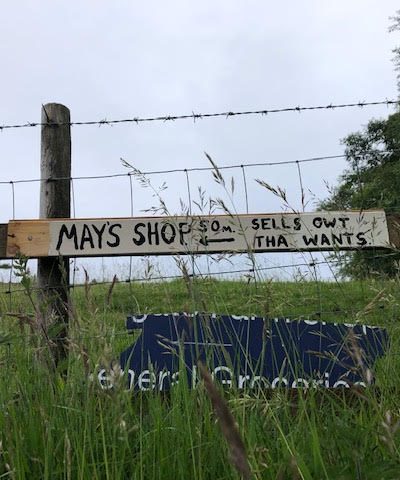 How the heck I got to the end I will never know. But the feeling of accomplishment I got as I hobbled down to the finishing flag was overwhelming.

I was proof that one of the plodders had achieved something I thought that only the elite were capable of. Pure testament that if you put your mind to something (and are a stubborn bugger like me) you can achieve the unthinkable. 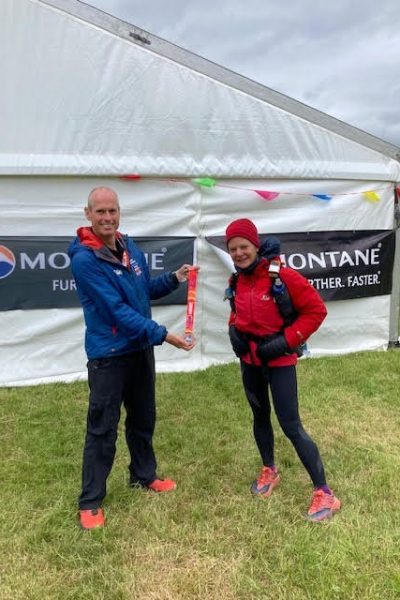 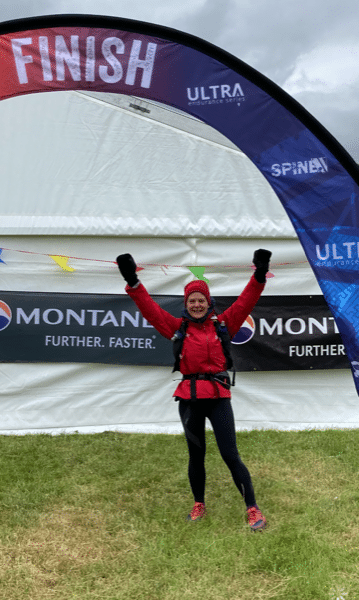 Would I do it again? No.

Would I recommend it to friends – Hell yes!

Highs:
Without a doubt being met by my Partner Rob and the kids at Lothersdale with their smiley faces and words of encouragement.
Our lovely running friend Gary unexpectedly coming out to meet us on one of the fell’s during the first night with a bag of goodies (which we weren’t allowed to have ☹)
The amazing support and messages I had before, during and after the event from friends and family – most of which came at the times when I needed them the most!
Being able to raise £830 for my son’s Springboard diving club for some much-needed equipment to help them gain confidence in the water after so long out of the pool during lockdown.
Meeting some of the most kindest and selfless human beings I have ever known.

Lows:
Coach road – I never EVER want to run that road again!