Medal Success at the Cheshire and Northern T&F Champs

Four young Macclesfield Harriers made the journey to Hull last weekend to compete in the U15/U17 Northern Age group championships, returning with an excellent haul of 3 medals! Albert Bradshaw maintained his excellent recent form taking the gold medal in the U17M 200m event in 22.53 secs. Charlie Orphanides, in his first competition in over 2 years, took silver in the U15M javelin (39.18m), bronze in the discus (25.22m) and 4th in the shot put. In the U17M age group, in addition to competing in the 100m, Tom Danson secured a PB performance of 5m71cm in his specialist long jump for 6th place. Rebecca Dilworth competed in the U17W 800m and although slightly below her own very high standards on this occasion, it is great to see our athletes put themselves forward at championship events. Well done to you all!
Barbara Murray 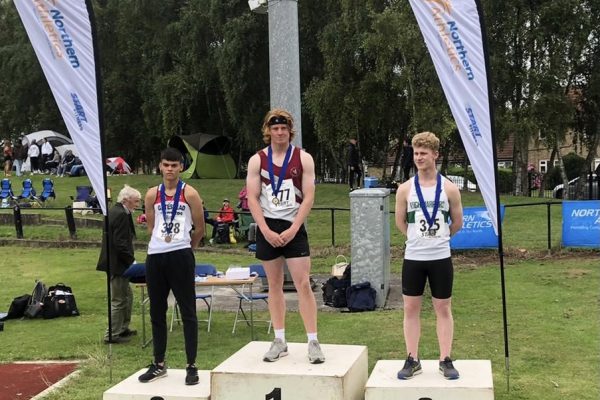 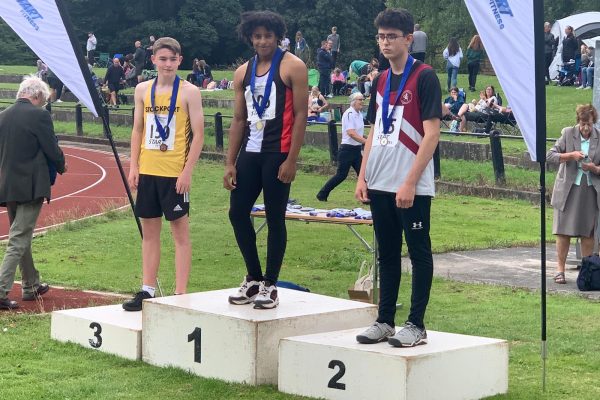 As life slowly returns to some kind of normality, the uncertainty of any Track and Field season actually taking place this year was a constant topic of conversation in the first few months of 2021. With the cancellation of the indoor season and English Schools XC competition amongst others, the prospects of the Cheshire County Championships taking place also appeared to be slim. This fixture usually takes place in May, providing an early season curtain raiser and the opportunity to put into practice all those months of pre-season training. After much consideration it was decided that the fixture be rescheduled for late August. Its a rare opportunity for athletes from Under 13s to seniors to compete over the same weekend with some seriously impressive looking medals on offer and the chance to claim the accolade of County Champion.
Despite being rescheduled in the summer holidays and taking place across the county in Ellesmere Port, Macclesfield Harriers were once again out in force on what turned out to be a weekend of shall we say mixed weather, Those who travelled to compete on the Saturday not only had other athletes to compete against but fought a constant battle with heavy rain throughout the day, Those lucky enough to have their events scheduled for the Sunday should maybe have considered packing sunglasses and Factor 30 suncream.
Starting at the lower end of the age groups, the Under 13s claimed some early successes with Elizabeth Pendrill winning Gold in the 70m Hurdles and Emma Farmer claiming the Bronze medal, continuing her medal haul with another Bronze in the Javelin and a silver in the High Jump. Not to be outdone by her sister, Katie Farmer won Gold in the Discus and Silver in the Javelin. Finally in the Under 13’s Corinna Knuckey won Bronze in the 150m sprint. 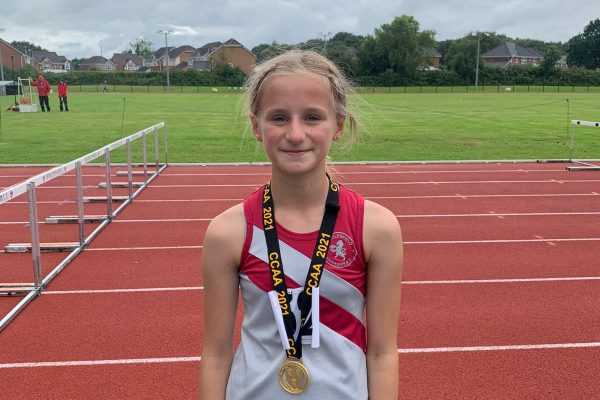 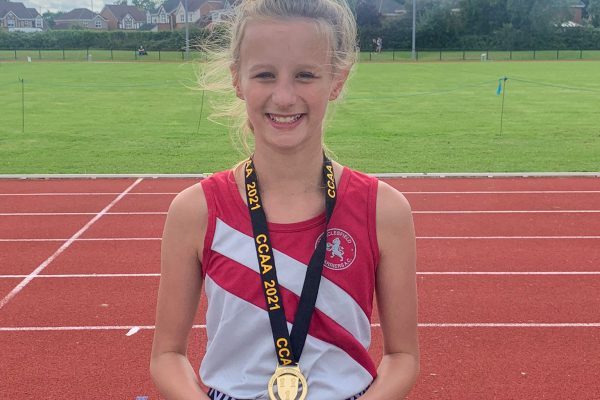 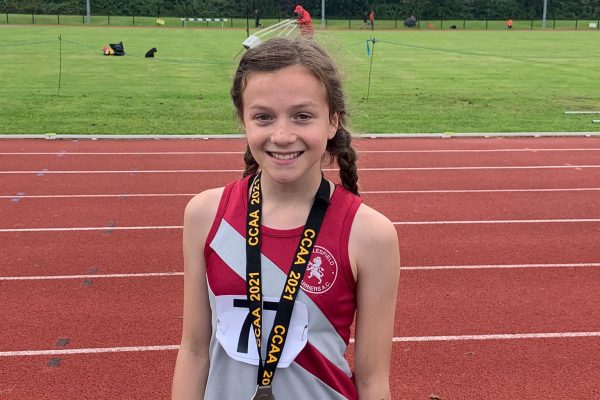 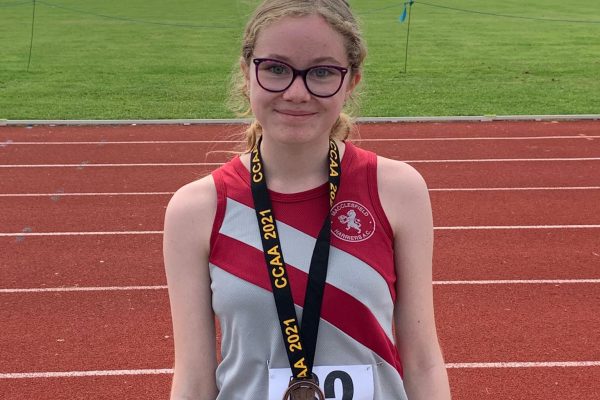 Moving up to the Under 15’s and another sibling success, this time for Marianne Knuckey who won a well deserved Silver medal in the Javelin. Interestingly, all the medals bar one came in the throws in this age group, Lola Whitlock taking a Silver in the Hammer, Will Roberts winning Bronze in both Discus and Javelin and to show his versatility another in the 800m, Lewis Patmore got bronze in the U15B 1500m and finally in what has to be the most successful medal tally of the weekend, Charlie Orphanides became U15 County Champion in Hammer, Discus and Javelin almost making it a clean sweep. just missing out on the Shot putt Gold to take Silver. I’m sure his dad and coach George is very proud of his achievements. 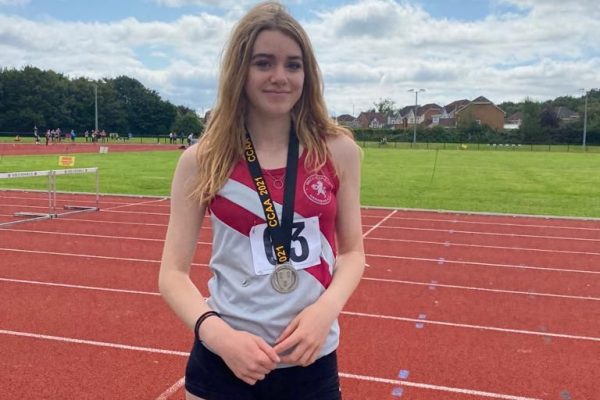 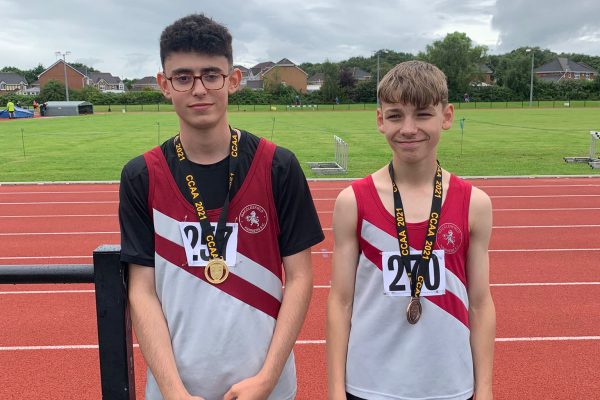 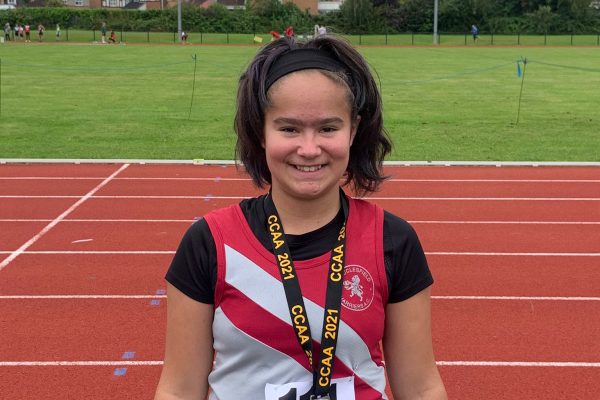 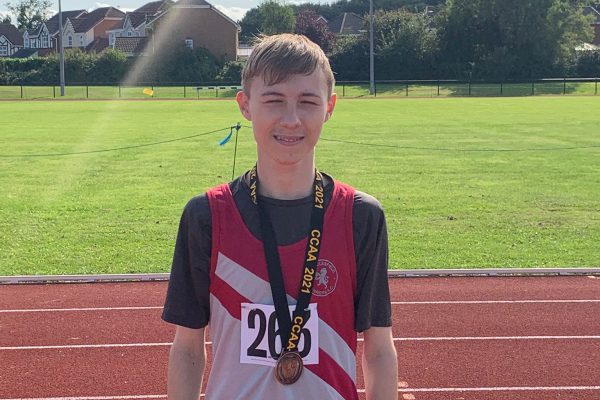 In the Under 17 age group there were more claims to the title ‘County Champion’. Libbie Grindey had a very impressive Sunday with a Gold medal in Triple Jump and Silver in Long Jump and Javelin. Hayden Blunn winning Gold in Shot, Silver in the 100m Hurdles and to complete the set, a Bronze in Javelin. Callum Wain won the U17 Long jump Gold and took the Silver in the 400m. Thomas Danson won a brace of Silver in Long Jump and the 100m. In the middle distance races, Rohan Jensen won Silver in the 1500m and Philip Goodfellow in his first season in this age category won Bronze in the 800m. 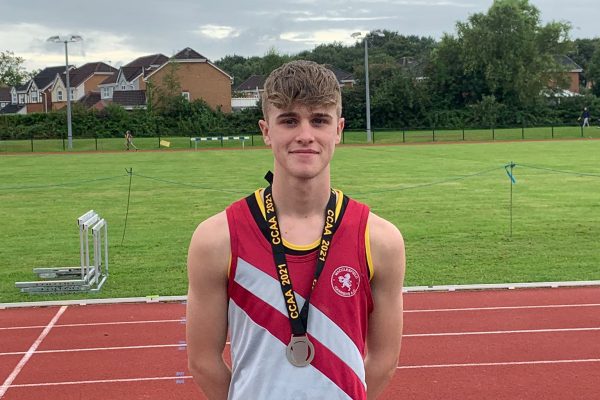 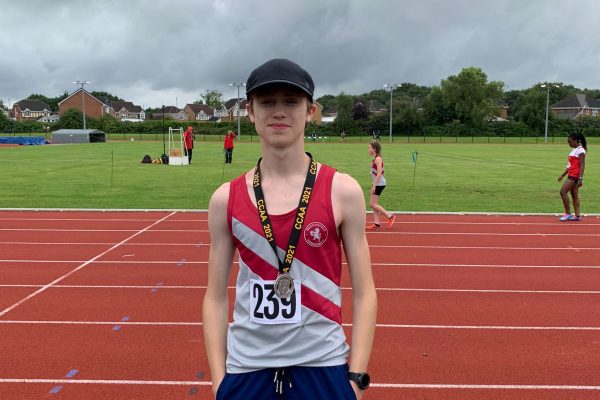 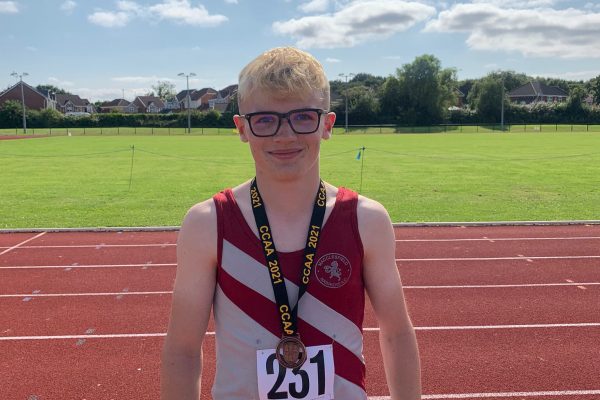 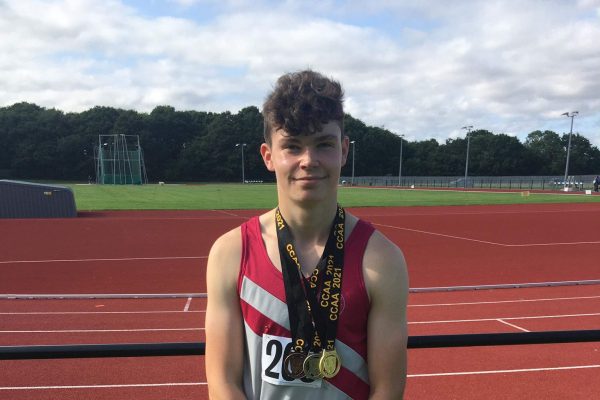 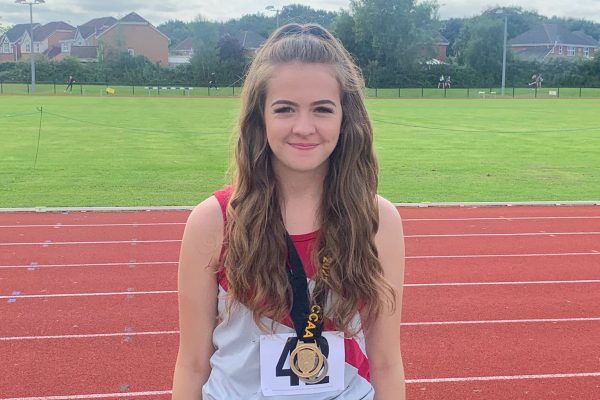 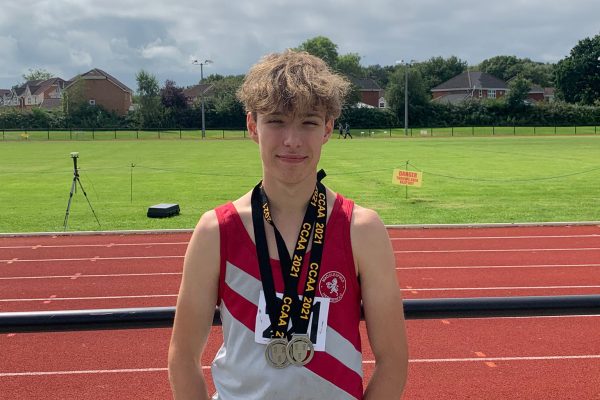 Tom Willshaw led the charge for medals in the Under 20 age group, winning Gold in the Triple Jump and Silver in the 100m. Thomas Roberts also won Gold in the Javelin.
Finally, the seniors. At the very lower end of this age group, Nick Blore was the winner of two Gold medals in events that proved to be rather challenging in the heavy rain, Pole vault and High jump. He won Silver in the 200m also. Ashley Pritchard won Senior mens’ Discus and Silver in the Shot putt and again in the throws, a hat-trick of medals for Charlie Bird, Silver in Hammer and Bronze in Javelin and Shot. In the horizontal jumps Simon Frith won Gold in the Long and Triple Jump and finally on the Track, the Senior mens’ 3000m title and Gold medal was awarded to Chris Goodfellow. 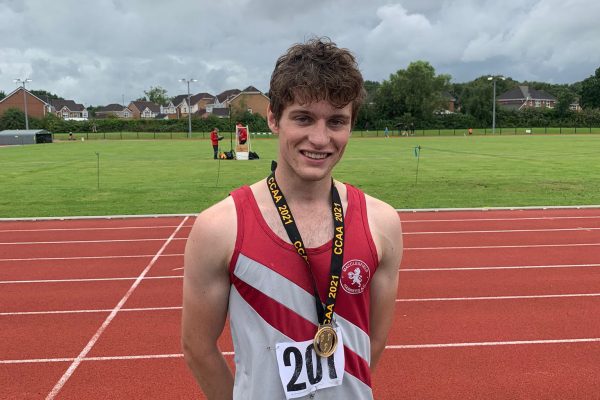 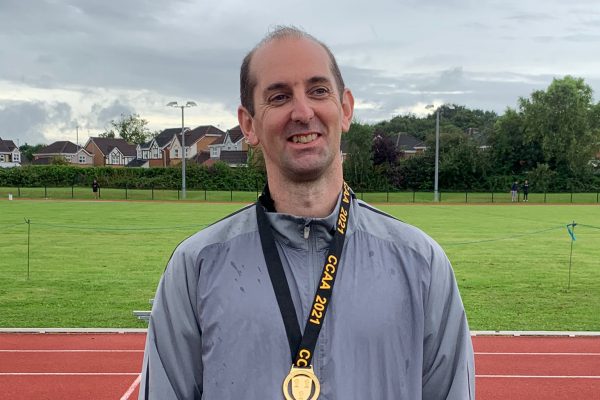 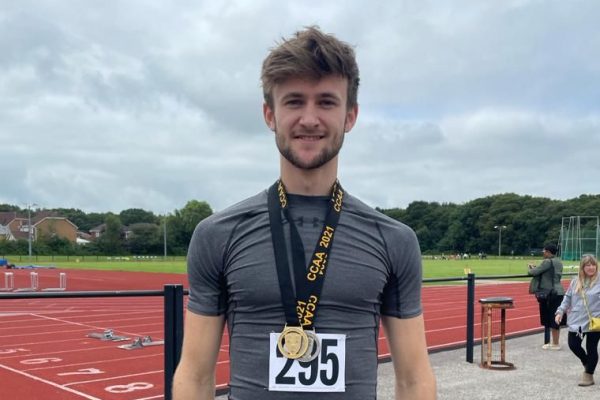 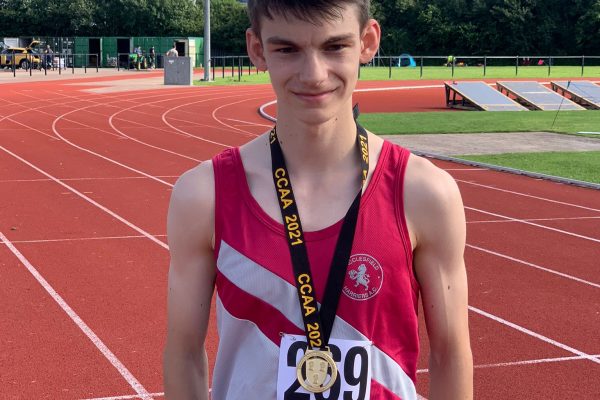 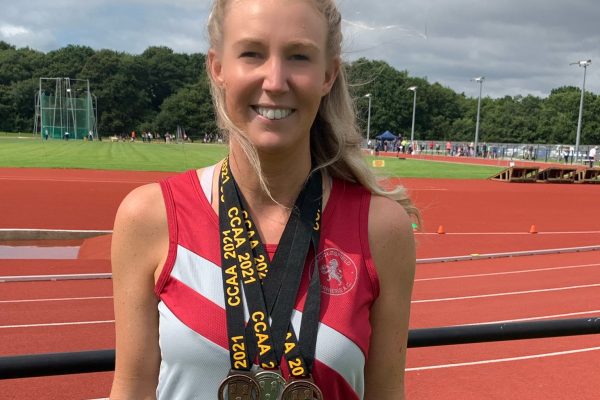 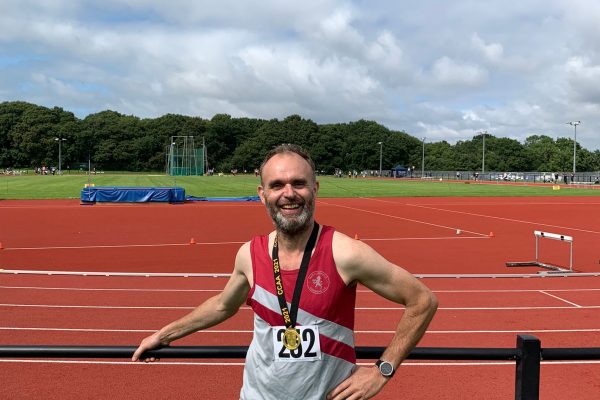 Congratulations to all those who took part in the Championships and as always heart felt thanks to all the officials, parents and coaches who make these competitions the success that they are. I’m sure that all those who made the journey to be a part of it in whatever capacity would agree that they were well worth waiting for.
Simon Frith