Introducing Macclesfield Harrier, Gary Rogerson. Since joining the club in 2016, Gary has become a fundamental member of the fell group. 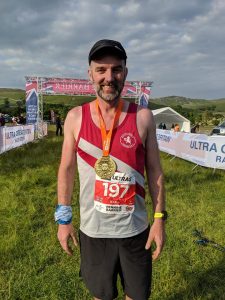 Gary enjoys the short local fell runs but is also partial to some ultra-running. His most recent ultra was an whopping 100 miles along the Souths Downs Way. Over to Gary to tell us a bit more about what running means to him;

GR: Around 2012, nothing to do with the Olympics, I have 2 boys and wanted to get fitter to keep up, so decided to do a marathon (Brighton 2013 3:36:05). Joined my local club in Surbiton soon after, got involved in lots of racing and another marathon (Manchester 3:08:04). Running and racing with others makes a difference!

GR: From around 2016 when I moved north, but more actively over the last couple of years. It’s bigger than my last club with more diversity of activities, I’ve really enjoyed the move from road to trail and fell, but shhh I do still like tarmac now and again.

GR: One road, one trail! London Marathon 2015 (3:09:54), I had a Good for Age entry from Manchester. It felt special to start in the GFA pen and filter to the start ahead of the mass start. Ran alongside a gorilla for the first mile, overtaken by Toy Story Woody in Docklands and then a record-breaking nurse on the Mall. Lakeland 50 2019 (11:48:39) running through Ambleside, I felt like a rock star with people in pub gardens standing up and cheering, I couldn’t see any other runners so it must have all been for me! 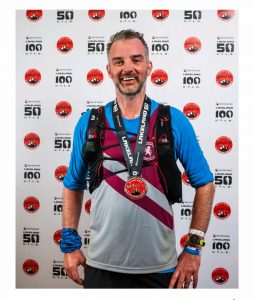 GR: The South Downs Way 100 2021 (23:47:14) climbing up Windover Hill through the mist and feeling the warm sun rise after running and walking through the night, knowing that there was only 1 more bump to go and that I’d finish in under 24 hours, which was the plan. 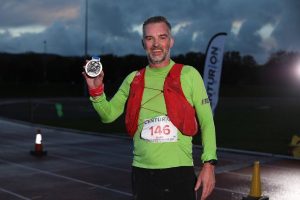 GR: It’s my time. An escape. Time to think or explore, to run in a group and socialise, to challenge myself. I love that we are all a ridiculous sweaty mess in our running kit at the end of a race, it’s a great leveller.

GR: Find balance. Go off too fast and hold on for dear life. Pick a race you don’t know you will finish. Do things that scare you whether it’s going like lightning over 400m or running a crazy long way. And then don’t run, go to the pub instead. Take time to rest and recover it’s easy to forget.