Introducing Macclesfield Harrier & Team GB Age Group Triathlete, Lisa Cox. Lisa is a true example of where pushing yourself outside your comfort zone can lead you. 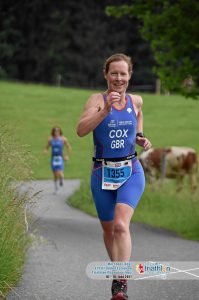 In my late teens, I discovered that going out jogging helped to clear my head and relax- I have never looked back!  I developed a passion for exploring on my own- for me, the more unfamiliar the route, the better- I rarely do the same route twice!  In 2010, a friend persuaded me to take part in a triathlon, which has really become my speciality now!

I joined in 2017, once my kids were independent enough for me to have some freedom in the evenings!  I enjoy the social aspects of running in a group, although I still really enjoy running on my own too!  I am always frustrated that there are so many different Harriers groups I would like to be part of, and nowhere near enough time!

In 2017 I represented Team GB for the first time, at the European Triathlon Championships in Kitzbuhel.  I was super-psyched for the event, and was so proud to be there, introduced as one of the ‘athletes’, with all my family supporting.  I remember running through a woodland path with a mountain backdrop, like a scene from The Sound of Music.  There were crowds cheering me on, and I was thoroughly emotional as I crossed the finish line, delighted to be 8th in my age group! 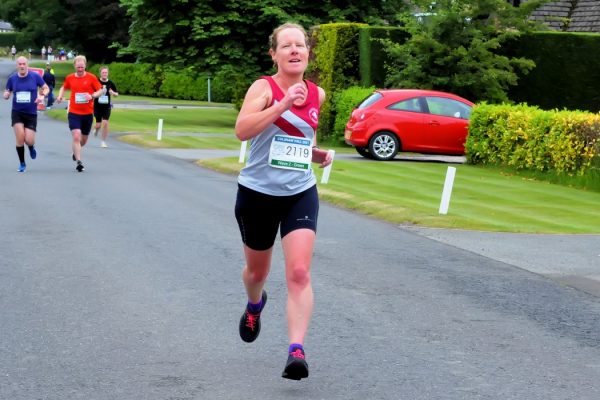 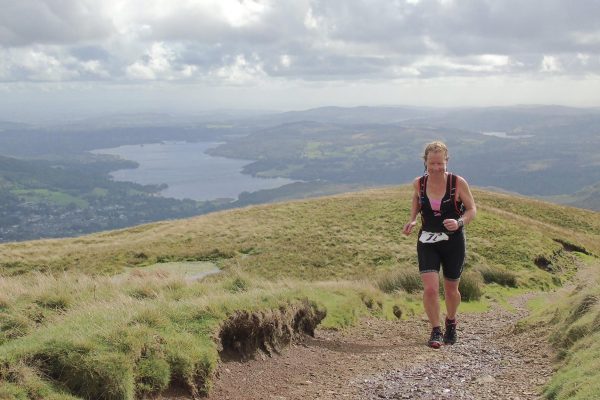 Last summer I led a Saturday trail run session from Pym Chair- there was a record turnout of about 18 runners, despite filthy weather- everyone was totally game on for whatever the weather threw at us- which turned out to be a pretty much uninterrupted deluge of horizontal rain.  We did a fabulous route through Thursbitch, Corkscrew and Dunge Valley, really made special by the ‘blitz mentality’- ignoring several bail-out opportunities, everyone threw themselves into it and savoured the wild experience.

For me, running is my ticket to adventures.  It gets me out into the wild, exploring new places, and getting to know new people too.

My tip for others is never to under-estimate your own abilities.  I was the child that the school PE teachers gave up on, but by committing effort to the sport I enjoyed and daring to aim high, I now regularly represent Team GB- something I would not even have dreamed of back at school.