The Isle of Jura Fell Race

The Isle of Jura Fell Race is described by its website as ‘…a classic on many a fell runner’s wish list; a true test of hillcraft, endurance and fell running technique. It is one of the toughest challenges in British hill racing at this distance, and one of the best weekends on the calendar’.

At the end of May 2022, Allen Bunyan I decided put these claims to the test. We knew that both of the current record holders (M – Finlay Wild, L – Jasmin Paris) would be be in attendance this year and we were keen to pit ourselves against these legends of the sport. In addition – despite the awkwardness of the location, many runners return year after year to the island. In fact, the race organisers award a special plaque to those who complete the race 21(!) times. We wanted to discover what keeps people coming back.

One of the factors is likely to be the location. The race campsite is a beachside field immediately opposite the Jura Hotel and world-famous distillery. There are a variety of transport options, but we chose the one-hour ferry from Tayvallich, which docks adjacent to the campsite, a local shop and a café. 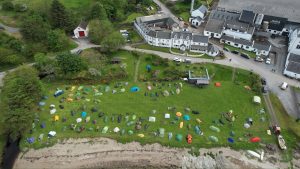 Along with these food choices, there’s a pub attached to the hotel and a small takeaway booth selling quesadillas and nachos (with haggis! Alongside other options). So there was plenty of catering variety the night before the race, along with time for a bit of an explore some of the way to the first checkpoint (conclusion: bog) and along the road to reverse the route from the final checkpoint (conclusion: a long way). Then it was early to bed, despite the 10:30am start making for a relatively relaxed morning since registration and the start were both adjacent to the campsite.

The race is 28km with 2,370m of ascent – however, the last 5km are back to Craighouse along the (flat) coastal road, so that magnitude of ascent has to be packed into just 23km. It wasn’t going to be easy. 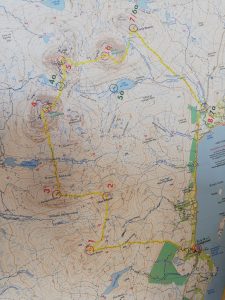 So to my memories of the race itself. I knew after the first few hundred metres of gravelly track we were going to be straight into an awkward tussocky bog where overtaking would be challenging, and also that the first half of the race would play to my strengths a lot more (i.e., no crazy scree descents) and so consequently I deliberately set off pretty hard. So I was ahead of my key targets (Allen and Jasmin, obviously – Finlay was long gone) from the outset. The bog was knee-deep at times but most of the climb was run-walk steepness and it didn’t feel too bad.

Relatively gentle descent to the col and then again, ascent to CP2 was okay. Glanced behind and saw Allen catching and assumed he’d make up time on the downhill, and he kindly hummed the Jaws theme tune to let me know the overtake was imminent. But that was basically at the col, and so we did the climb to CP3 (the last of Jura’s Pips) together.

There was a moment of nervousness coming off the summit as the group ahead of us were too far ahead to see where they’d gone. I was just pulling the map out when the third guy in our group just went straight off the edge exuding confidence. Allen followed him (as per) and my glance at the map told me this was a good call. Both of them descended much better than me though, and Strava tells me at the bottom of the descent I was about a minute down.

The next climb was the biggest of the race and was definitely reminiscent of Yewbarrow in the Lakes – but moreso – a vague trod with loads of direction changes and rocky sections interspersed with steep heathery parts. I felt pretty strong near the bottom and seemed to gain a lot of time on the duo up the first third, but then the gap stayed constant at around 30s all the way to the summit of the first Pap.

The next descent was steep very loose stones near the top, on a winding trod, then steep relatively terrifying scree lower down. The scree continuously changed from nicely skiable into too-big-to-move at the drop of a hat, and Allen and his new friend had gapped me to so much of an extent that I didn’t have any help when it came to picking a line. Consequently I lost another 2.5 minutes on this section of maybe 700m, having to slow to a walk/scramble on several occasions where the rocks got too large, which was a bit depressing. However I reminded myself that I had known that this was going to happen! And I was only actually passed by one person here, a guy in bright green who I’d also seen on the previous descent but I’d re-passed on the climb. He flew down. I saw him on each of the subsequent descents too, as I passed him on every climb! There’s something for everyone in this race.

On the climb to CP5 I got back 30s, reducing the gap to Allen to 2.5mins again. The summit of this one was a very rocky ridge where three points of contact were required in places for the last hundred metres. The conditions were getting a bit too warm lower down, but there was sufficient breeze on the tops for it not to feel too unpleasant. 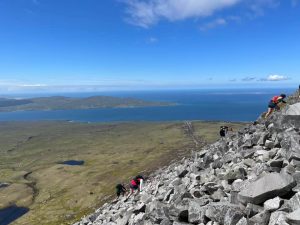 Another rocky trod down to the col and then a sharp right turn down a grassy route through scree either side made this descent much more pleasant than the previous two – however with no-one around to help me pick a nice line I was far too far South and there were a couple of places I had to negotiate unexpected crags. However in general it was a far more Mark-friendly descent and I only lost 30s on this one.

I knew that the climbs after the first Pap gradually decreased in magnitude but I hadn’t flagged that they became progressively steeper! This one was navigationally straightforward, just pick the best line up the spur and go for it. A couple of false summits very near the top nearly led me too far right, but a quick glance at the map gave me some confidence. Gap back down to two minutes…and then the descent I’d been most worried about.

The race guidance for this leg had been ‘don’t just take a direct compass bearing, there are some massive cliffs and you’ll die (I may be paraphrasing, but only slightly) and my friend Martin (who I met skiing in 2019, I think)’s advice had been ‘head down the scree to the right, when it runs out, pick your way across to the next screen slope to the left, and repeat until you run out of scree – then you’ll be on the contouring trod’.

I tried to stick to that advice but it proved easier said than done! As with the previous scree, some of it was lovely and some of it very much wasn’t. When each scree run ran out, if you timed it slightly wrong you could be sliding pretty fast only to suddenly stop and be catapulted forwards. I caught my toes a couple of times when this happened and was pretty lucky not to fall. Looking at Strava afterwards it looked like I was one scree run too far to the right, which meant one of the sections I had to pick my way across was super-long and I lost quite a bit of time. This was where Jasmin (and quite a lot of other people, maybe 9(!!)) all overtook me. Definitely not my forté.

Allen gained 4 minutes on my on this section, taking the gap to 6 minutes. However once we got to the final climb I suddenly had loads of targets ahead, and I was still moving pretty well. This was the shortest climb but also the steepest, and by the summit the gap was back down to 4 minutes and Jasmin was only a minute ahead. 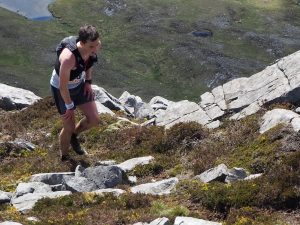 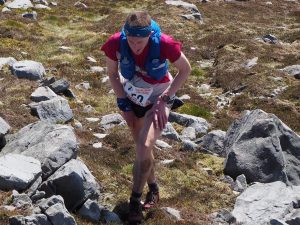 I had had high hopes for this final descent being lightning fast – not so – the start was a bit steep and technical, and then occasionally rocky, then quite a lot of bog still with the occasional rocky section to catch you out, so you couldn’t go all out. Still, I could see Jasmin getting closer and closer and when she stopped to fill a bottle at the river crossing, I took my opportunity and got past. 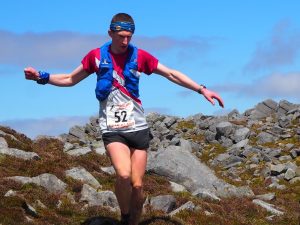 There was a further group of three just after her, and I overtook them through the super-boggy section just before the pond. The pond surprised me since I hadn’t been expecting one and so I didn’t know if I should be left or right of it! It’s not on the OS map. But the very vague trod appeared to go right and luckily this choice paid off and I was soon at the stile and to the CP under the bridge. Another minute stolen back and now just 3 mins behind Allen (obviously I had no idea! Hadn’t seem him for hours now).

Some people change their shoes at this CP so they can do the 5k run-in along the road in road shoes – we’d decided in advance that the time taken to change would outweigh the benefit and so didn’t bother. But after 20s or so I was overtaken by someone who had got to the CP before and done just that – and he was flying. Which was dispiriting and made my question my decision, but I was desperate for Jasmin not to catch me and so focussed as much as possible on keeping good form despite feeling myself fading – it was pretty hot at this point now we were back at sea level and I could feel my dehydration (pins and needles in fingertips etc.).

I passed another 4 people on the road (marathon training finally pays off in a fell race) one of whom was wearing Vaporflys and so had clearly stopped to change, which made me feel pretty good.

Final time 4:07 in 24th place – no Whisky glass for me (sub-4, although they didn’t do them this year since the distillery withdrew sponsorship; there was some kind of engraved wood carving instead) but I’d reduced the Allen-gap to only just over 2 mins which I was really happy with – and I know he’s pleased with his time too (4:05 in 21st). And I know we’re both proud to have beaten Jasmin for the first time! News from the front of the field was that Finlay Wild had broken his own record to go sub-3 hours, which is incomprehensible to mere mortals like us – to put it into perspective, he was nearly half an hour ahead of second place. Despite being well behind her old record, Jasmin took the ladies victory and was well clear of second place too.

In total I think I lost 8 mins just on bad-technique in the scree and bad lines on the descents, so in theory if I sorted that then I could get the sub-4. But honestly it would require a level of scree-practice I don’t think I’m going to get! Allen is far more likely to be able to knock 5 mins off by getting stronger on the climbs.

It’s a great race, despite the faff of getting here, and I’m very glad I made it. We were very lucky to have excellent weather though – coming back to the campsite or having to take the tent up/down in the rain a la mountain marathon would have made it a very different experience. So I don’t think I’ll be coming back every year – but definitely one day. I’d certainly recommend it for the uninitiated! Get in touch with Allen or me if you’re thinking about it and would like any advice on logistics or anything else. 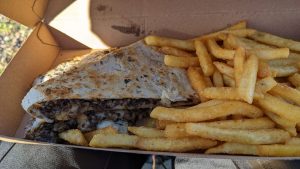 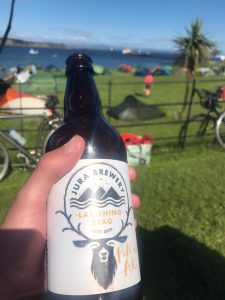