Introducing Macclesfield Harrier’s very own Marathon Man, Mark Godden. Mark kindly took some time out of his training schedule (Berlin and Snowdonia marathons) and new Grandad duties to tell us what running means to him. 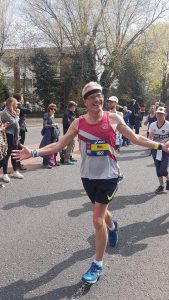 1: When did you start running?
Mark: In early 2013 I entered a 38 mile charity run/walk, because my manager had done it the year before and I was convinced I would be quicker. 10 weeks before the event I thought I had better train for it, not having run a mile for nearly 40 years. Eight weeks later I ran the Manchester marathon in 4:34 and two weeks after that the 38 miler in 8:41. In 2014 I improved those times to 3:56 and 7:32, and these remain my PBs

Q2: How long have you been a Macclesfield Harrier?
Mark: I joined in April 2016, having met a few friendly Harriers at races – and discovering that I wouldn’t always be at the back! By then I had run four marathons and 12 half marathons. Prior to joining I didn’t see the point of running in a group; I’ve since discovered how wrong I was.

Q3: What has been your favourite race and why?
Mark: What a hard question! I’ve now run 5 ultras, 20 marathons, 44 half marathons, around 60 other road races, 60 fell races and over 200 parkruns. My appreciation of a race depends on many factors – the course, the views, the weather, the pace, and most importantly the people. If pushed to name one it would be Kinder Trog in 2018. My marathon picks would be London and Snowdonia (road). The best half is Macclesfield, with Buxton and Excaliber getting honourable mentions.

Q4: What does running mean to you?
Mark: When I started running I had been playing hockey for many years, but my passion for that (and my capability!) was fading. I finally gave up the hockey in 2016 when I had to choose between the Langley 7 and a hockey match, and chose to run. My discovery of running has quite literally changed my life, partly because it seems to be something I can actually do and partly because of the wonderful group of like-minded people I have met, both in the Harriers and in the wider running community. The single biggest satisfaction I get from running is helping others achieve their goals.

Q5: Do you have a top tip for other runners?
Mark: Sometimes people ask me for training advice when preparing for a longer race. My first tip would be to remember that I tend not to follow my own advice. So, warm up before a run. I don’t.
2nd tip: If you want a marathon or half marathon PB, go for Manchester. Of all the races I have done, these are the flattest.