Introducing  Macclesfield Harrier, Andy Skelhorn. In addition to knowing some great routes, Andy is also a wealth of local knowledge. ‘Skelhorn Tours’ -Andy, ably assisted by his 4-legged companion Ziggy – can often be found out on the fells, combining running with educating Macclesfield Harriers on local points of interest. 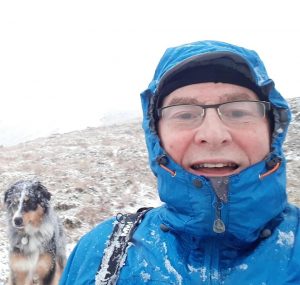 Over to Andy to tell us a bit more about himself;

Q1. When did you start running?
AS: WhileI was a student, back in 1982, I ran the Teggs Nose fell race with a hangover (in Green Flash pumps), and then I tried out a marathon in 1984. I didn’t suddenly start running, as I had been hill walking and mountaineering since a teenager, and I still look on running as part of the same activity. It’s just a way of moving a little faster in the hills.

Q2. How long have you been a Macc Harrier?
AS: I joined Macclesfield Harriers in 2005, after reading ‘Feet in the Clouds’, and realising that there was a local group of fell runners. Until then I believed that proper fell runners only lived in the Lake District, and that they ran up all the mountains as well as along and down them. At first, I struggled to keep up, but within just a couple of weeks I really felt at home.

Q3. What has been your favourite race and why?
AS: My favourite face was Jura. I had to up my game and complete several AL fell races before I could qualify to enter. The whole weekend was fantastic. Just getting to Jura is an expedition in itself. There was some proper terrain (steep loose boulder fields and deep bogs), and the scenery was fantastic. I crossed the finish line at the distillery and ran straight into the sea, and was then passed a pint of Guinness as I staggered out again. 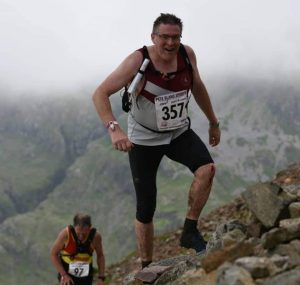 Q4. What’s your favourite running memory?
AS: Supporting a Bob Graham Round over the Langdales at dawn, with the bright sun coming up behind us. Feeling confident in my navigation and chatting away as we ran above valleys filled with white fluffy clouds.

Q5. What does running mean to you?
AS: Good days out. Travelling across and exploring the landscape. Being outside in great scenery and sharing time with friends, new and old.

Q6:  Top tip for other runners
AS: There is no hard line between running and walking in the hills. Don’t worry about speed and performance. Just get out there at your own pace and enjoy it.