Despite many of Macclesfield Harriers T&F athletes already away on their summer hols (Cornwall and Wales, right?) we had a very good turnout of athletes from all age groups. It was wonderful to see so many young faces competing, possibly for their first time and enjoying it. No tears or unhappy faces were seen.

As far as results on the day go, both the male and female teams came first (U13-Seniors) and the U11s came a brilliant second. The individual timings, distances and full results are now available here.

Thanks to all the track officials, field judges and everyone else who helped make this a fun event, which ran on time without any hiccups. Let’s hope there are more teams to compete with (and beat) in future events. 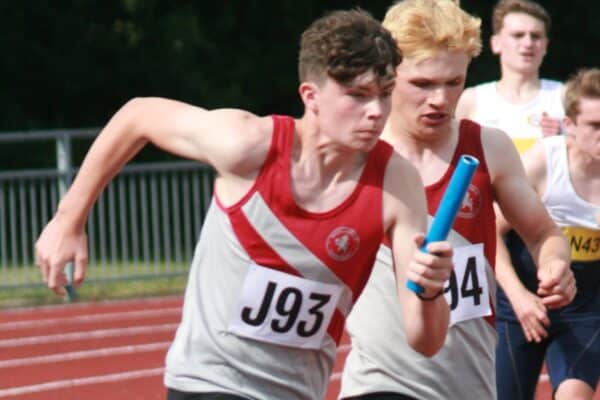 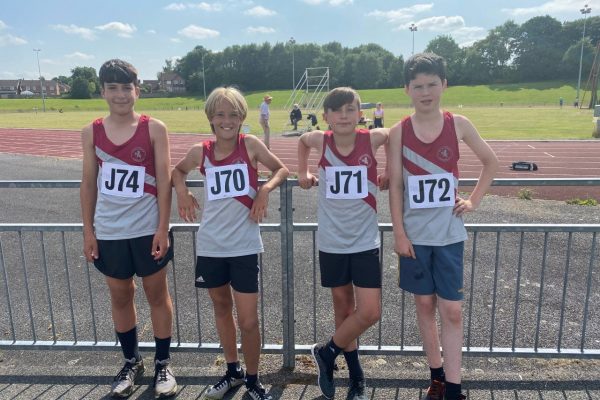 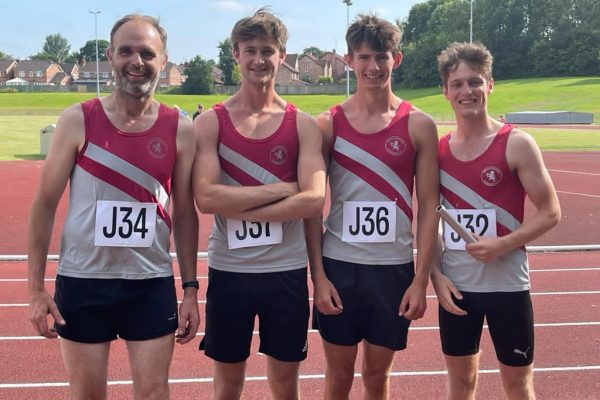 Some age group highlights
What another amazing team performance from the U11 girls this season! Considering that this is only the second competition they have done, all the girls experienced a great deal of personal success and are always very supportive and motivating of each other. Impressive and speedy performances from Elsie, Abbie and Evie in the 75m had all three finishing first in their races. Nila continued to dominate in the javelin with a stunning throw of 11.84m that also landed her a first place position. Mia and Holly also continue to improve their performance in the 600m with both girls achieving PBs. The day finished with an exciting 4x100m relay where we secured second place, narrowly missing out on the win by a fraction of a second. All in all, a fantastic effort from girls and smiles all round. Well done girls!

The U13 boys team put in a strong performance as a crack squad of 4. As usual, Will, Tristan and Stan put in a great performance in the sprints with Ceyhan graciously accepting the challenge to run the sprint to get extra team points and ran a brilliant race. As did Tristan, who also took one for the team and ran his least favourite event in the 800m to get us those extra points. On the field, special mentions go to Will and Tristan for having a go at the high jump and jumping the bar for the first time and Will coming in 3rd. Also a brilliant performance in the shot by Ceyhan who finished 1st with a great throw of 6.44m.

The U15 girls were down on numbers but the spirit was still strong across the team. The highlight of the day was the relay with another closely fought second place by the team. Special mention to Grace for stepping up to the team with some last-minute practice on the change overs. Also well done for all the 100m sprinters and Isla for again representing the girls in the middle distances. Millie and Marianne took part in the high jump and shot respectively. Well done to all the girls.

U17 Boys performed brilliantly considering their depleted numbers. Well done to Callum for trying his hand (feet?) at trifle Jump (apparently that’s what they call it out there on ‘dem farms), Phil for stepping in and throwing the cannon balls with Hayden, Rohan & Phil for filling in on the makeshift relay team and finally a big well done to Joseph Allen who competed in his first competition for the club. Excellent.

Five U17 ladies took part, with a great PB for Libbie in the long jump the performance of the day. It’s a rare thing to have 4 U17s undertaking the 1500m race, and the start line for the race comprising 8 Macc runners (the U17s being joined by 4 U20/senior ladies) was a great sight.

It was another fantastic turnout and performance by the Under 20’s & Senior Ladies. A warm welcome to newcomers Helen Saunders in the 3000m and Faye Sharpley in the 1500m – hoping you enjoyed the track experience and are keen to join us again soon! Great PB’s for Izzy Watkins in the Long Jump and Ellie Stockdale in both the 100m and Long Jump. A special mention to Rebecca Main, following an injury, it was so great to finally see her back, with a strong performance in the 1500m.