First a congratulations to our elite team (Nathanael Booker, Mark Burley, Allen Bunyan, Joseph Pickard and Andy Beavers) who managed to run the 33miles from Sheffield City Hall (or was that town hall – I’m still not sure) to the Boars “Making Sunday Special” Head, Poynton in a superb 4:07:30. Even the hilarious cock up of a change over that saw one of them running the wrong way through Hope wasn’t enough for the other teams and they won overall, beating Pennine by just 60 seconds. Then our ladies team (Rebecca Till, Kathleen O’Donnell, Kerry Riley, Rachel Hall and Rachel Munday) beat the Pennine girls by 22mins, coming in 4:57:50. Great work guys!

The sunshine was unbelievable after the torrid storms we’ve had of late and 10 teams from 4 clubs set out from Sheffield – we fielded 4 teams. To take both prizes on the day was fantastic (20 individual Running Bear socks to be shared between them), but this was more than just any individual team, this was a club team event and we were One. Our runner-come-cheerleaders seemed to be everywhere egging each other on along the route. One runner even jumped between teams to join another leg runner just for the craic because he was having too much fun on the trail. A great experience for us all and one to whet the appetite ahead of the racing season. Next time get your hands up early!

Finally, thanks again to the rest of the team (Steve Swallow, Craig Marchington, Stephen Watts, Bernard Mccarron, Christopher Embrey, Dennis Kentrop, Oscar Trevena, Barrie Thomason, Tom Whittington), for just being generally awesome and each running brilliantly too. Apologies there aren’t many pics from the elite men -they were too quick!!! 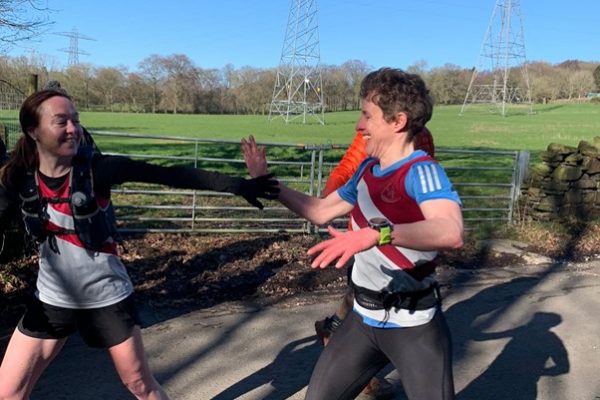 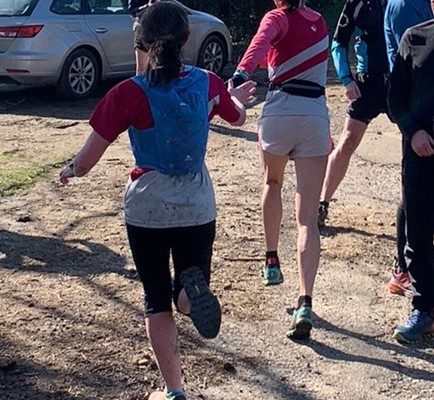 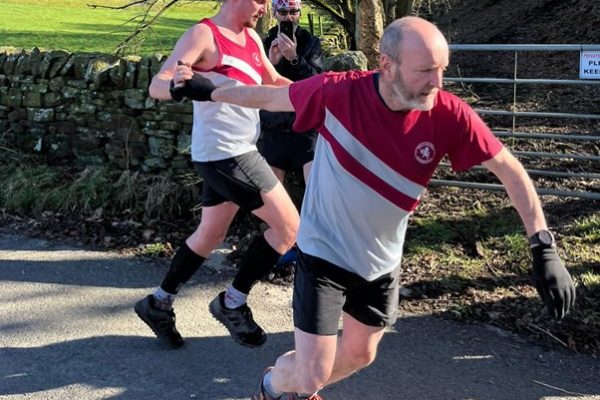 There are more pictures (and leg results) at the end of the article… and the full race report from Dave Jones (Pennine) is at the bottom of this post after the photographs.

Over to Kathleen for her account of the day in the way that only she can:

This wonderful event has been run in various stiles by Macc and Pennine clubs since Sunday 18th December 1988.  A traverse across stunning scenery from the Town Hall of Sheffield, delivering a baton containing initially a Christmas message from the Mayor of Sheffield to the Mayor of Macclesfield. It later moved to the route we did today, delivering a bat out of hill to the head of the Boar in Poynton.  Here are a few quotes from the brilliant club members who set it all up, with a great thanks from all of us:

Jim Kelly: Awards for the 1989 event in GO number 25 (including the: ‘We’ll meet again don’t know where don’t know when award to Alan Redwood for pioneering the Edale variation and for making Alan Ireland a happy man.)

Kath Turner: can’t remember the year but I remember taking over from Geoff Pett at the Cheshire Cheese at Hope, in fog, gales and snow. After a very challenging run over the Mam Tor ridge, attempting to hand over the baton at Mam Tor Trig point to someone, but having to be on hands and knees to avoid being blown off the ridge.

And the many absolutely crazy reccies with the Redwoods – in fact I still have my map stained with mud where Margaret slid off Back Tor on her back and me on my stomach in thick mud, much to the amazement of people walking towards us.

Barbara Murray: 1988, Raph did the first leg for the mens’ team that year and I did the 5th leg for the ladies’ team (Combs edge to Lamaload). That was an easy year with only 2 children to hand across (3 yr old and 1 yr old). By 1990 there were 3 children to hand over (ages 5yr, 3yr and 6 months) – Raph did the second leg and tick tacked in and out of the others cars back to lamaload to pick up the children from me and I did the final leg. Maybe it got too tricky for us after 1993 with 4 children, but who knows.

Thank you very much to Tom and Pennine for organising such a wonderful day for us all today – the kindness, leadership, time spent in organising this is no mean feat – we all very much appreciate it and the relaying up of the troops –

Thank you very much also to the very kind drivers – an eyelid was not batoned by Rebecca nor Rachel as they navigated all manner of rocky road – we are very lucky 😊)) – here is the account of the ladies day – straw hats blown off to kingdom come 😊.

The grand arrival of the Phaetons – an array of fine carriages arrived in Wellington st carpark in down town Sheffield – Nero opened his Domus and a number of thirsty legions descended. Mine’s a caramel mach-iato.

A gathering formed under the clock tower and a gong rang out 10am – an arrow was shot far and high pointing the way across the peaks.

Legion 1 – a winding battalion, the plumed horses and work horses alike, pulling a heavy load (the odd helmet or wheel falling off the back) – arriving at a mire of crimson pulsating blood – a fanfare to Ceasar up the tired heart.

Legion 2 – into the forest, dialling the sun, tarry not harrier – canter on to meet her by the old byre, bellow the bulls.

Legion 3 – flying down the hill, an eagle riding the thermal baths – on to Mam Tor, she won’t be long, the slabs of marble smooth the rugged path – a flash of white rush down the edge.

Legion 4 – a sickle cutting through the rock, churning mud up the Chimney on to the viaduct, she will soon surmount the horizon and take the bridge at great force

Legion 5 – floating down the hill to bring it home, cutting through the lyme with a poynted chalk – she will sprint to the boar as if his head would not turn again on the splits

The arrival of the crusade:

Into the Tabernae where all reclined with grapes and fine jugs of wine and cheer – with the wonderful Pennine guard providing a very kind overview of the wonderful day. 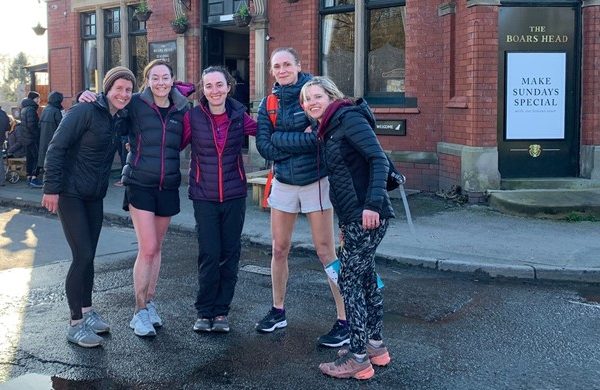 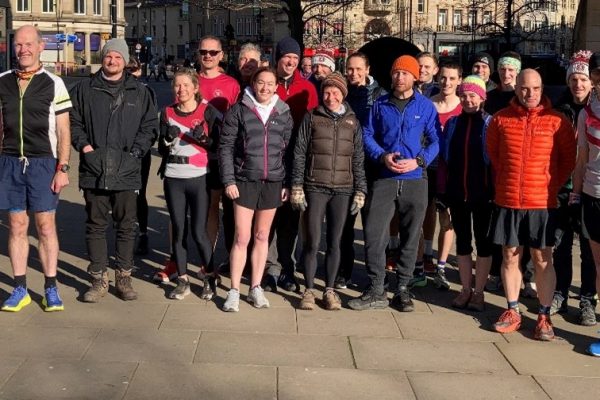 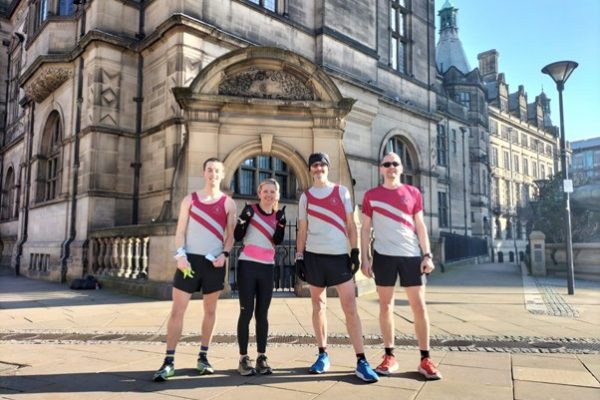 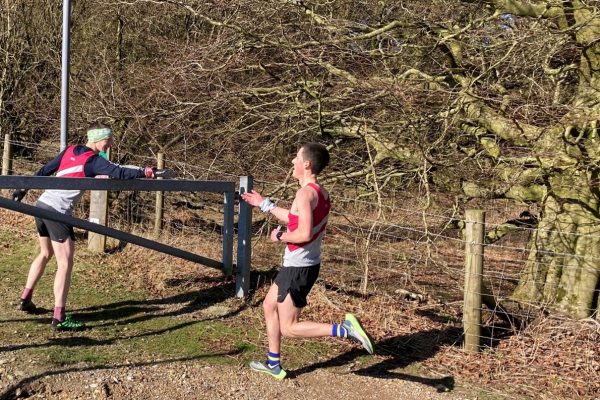 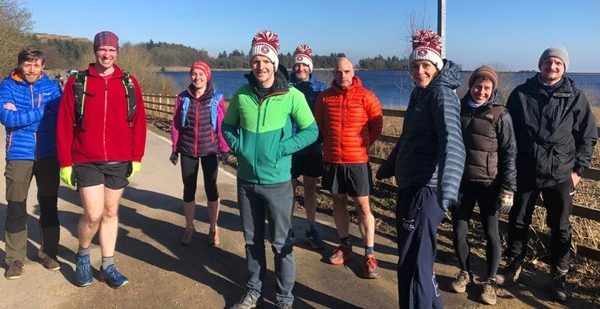 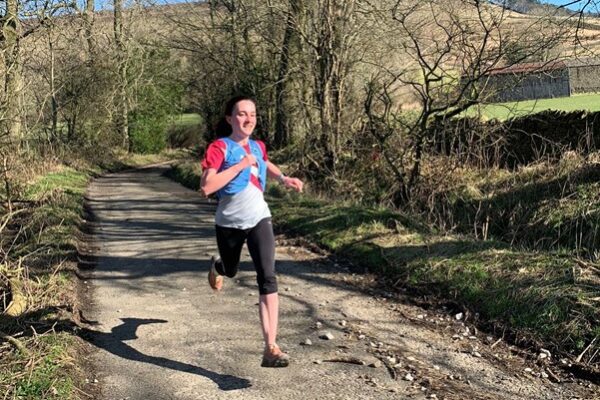 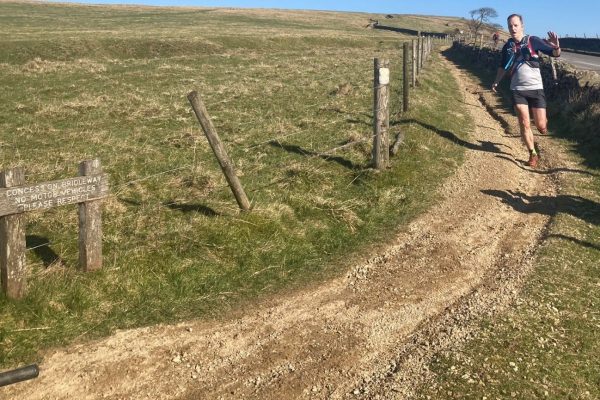 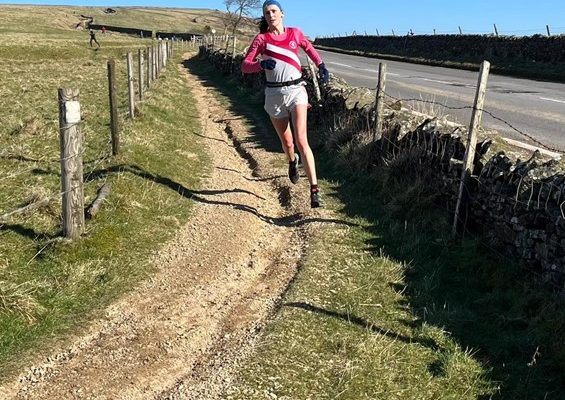 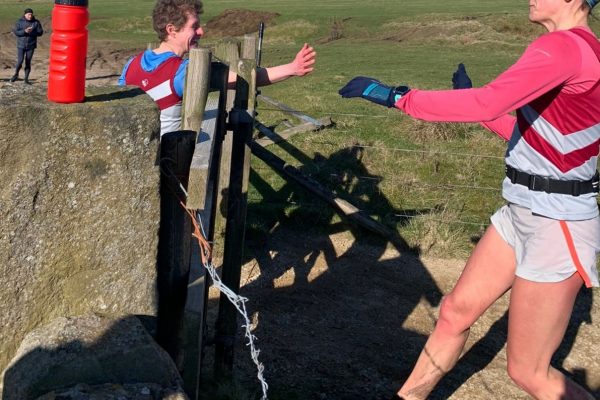 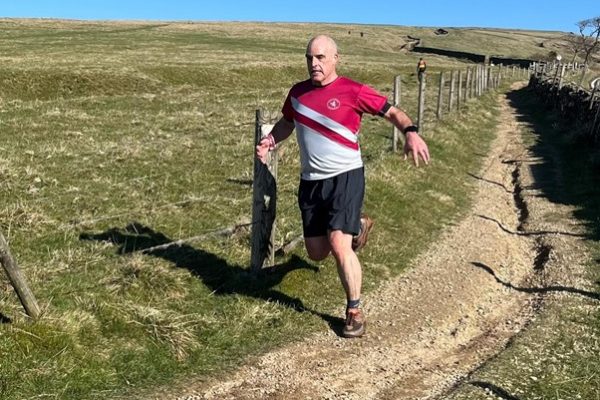 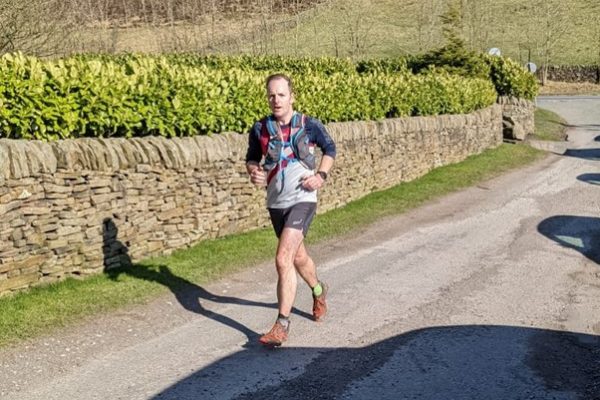 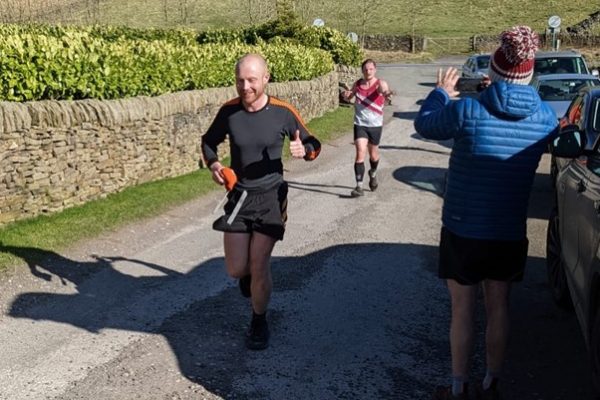 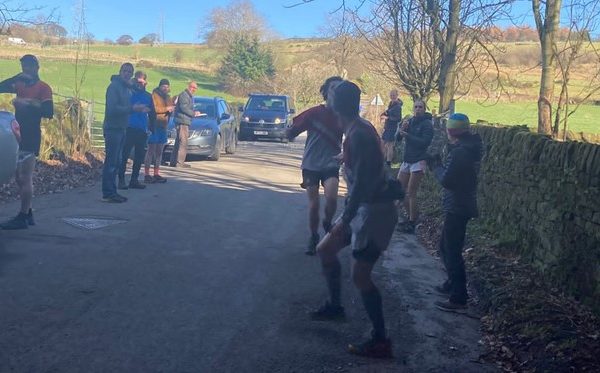 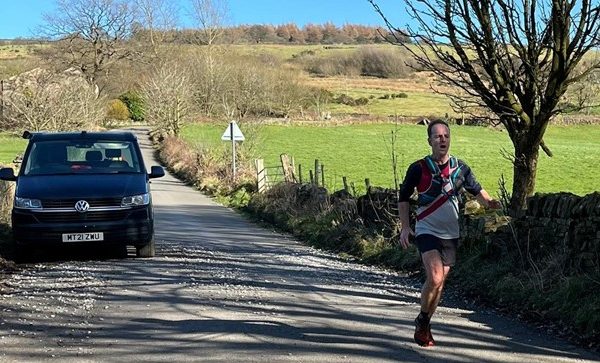 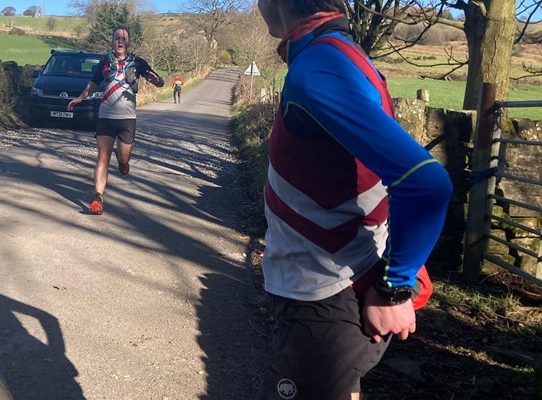 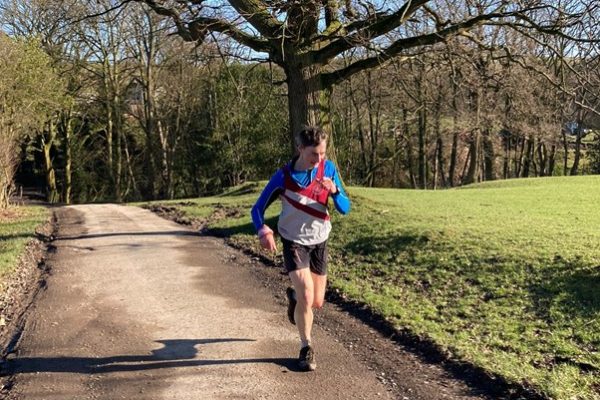 Sunday 28th November; event cancelled because most of the changeovers were inaccessible because of ice and snow.

The words “climate change” leap to mind as those two dates were a complete reversal of what was expected and, unfortunately, various Clubs had already got other commitments such as Orienteering events or Cross-country competitions which resulted in a much reduced field. However, a hard core of KFR, Macclesfield and Pennine plus enthusiastic newcomers Bramhall fielded a respectable total of ten teams, including three ladies’ teams, all ready to take on the Relay.

The approach to the starting venue proved to be a little trickier than last time the event was run because of the plethora of new building in Sheffield city centre which made navigation somewhat problematical but, as expected, it was all very quiet which reduced distractions to a bare minimum and everyone made it in good time, although Macclesfield, clearly intending to continue the tradition set by Trafford centuries ago, assembled at the City Hall instead of the Town Hall but the absence of other runners caused them to search round the corner. Fortunately they timed it just right as if they’d come round any earlier there would have been something of a dearth of athletic participants as we were all gathered out of the icy wind in the only patch of sunshine which was down in the Peace Gardens by the side of the Town Hall. However the leg one runners were all gathered on the Town Hall steps just as the (electronic !!) clock sounded for ten o’clock, so the Relay got off in time and Geoff’s watch was all that was needed for timing the whole event.

The vehicular support/running teams all made it onto Glossop Road and up and up and up to Redmires Reservoirs, passing the runners en route, where they discovered that months of lockdown had brought half of Yorkshire out into the countryside to walk, cycle, run, walk dogs and park their cars, which last did cause the odd frisson. In due course the handovers were completed and the cars were faced with a battle with traffic which caused some of them to arrive at the next changeover a touch late, which did at least delight Geoff and me as we saw the leading Macclesfield runner heading directly to Hope, having missed his uphill turn. Unfortunately he was corrected by his team-mates and rectified his error otherwise they might not have won the event.

In the way of things the runners continued to battle up in the open air with the switchback course and little mistakes were made and, conversely and unusually, the vehicles were struggling with the almost heavy traffic which didn’t ease until after the Winnats Pass.

For, I think, only the second time the positions of the first three teams remained unchanged throughout the event but then their members were deliberately chosen for their abilities whereas the other teams comprised, quite rightly, runners of different abilities and some teams were a runner short, which left one runner having to hand over to two teams or, in two cases, choosing to run two legs instead of one.

By the time the leg three changeover at the end of Rushup Edge arrived it was possible to see the runners approaching down the Edge and then the next runner heading off down the track, all of which added to the fun and no doubt added some speed to the running and this was repeated to a lesser extent at the next changeover as the last leg runners tore off down the road before the climb all the way up into Lyme Park and the concluding downhill blast. This last leg very nearly led to an alteration in the positions as Luke Cook of Pennine, having set off four minutes behind Andy Beavers of Macclesfield gradually reeled him in until they were both “eyeballs out” all the way from the top of the ridge down to the Boar’s Head with Andy managing to hold him off and win with a gap of just one minute after some 34 miles of racinG!

One after another all the teams came home and congregated on the bridge in a sociable, chatty group while they deconceived the day’s efforts and it was a good job the weather was still pleasantly sunny as Simon at the Boar’s Head had to apologise for the fact that we couldn’t yet go into the pub as he had planned because the kids’ party who were booked into our reserved room had arrived half an hour late and were still occupying it. However all that happened was that people went in, got their drinks and brought them outside to continue chatting until Simon had got the partygoers out and we could all go in and carry on chatting out of the wind and with easier access to beer and food.

In due course the extensive and extravagant prizes, ten pairs of Running Bear socks, were awarded to the men’s and ladies’ winning teams, both unfortunately Macclesfield, and the results list was circulated.

Everyone seemed to have had a good time and obviously entered into the spirit of the event and particular thanks are due to Geoff and also to Simon at the Boar’s Head for his hospitality – and of course to all of you for participating.  I think there’s sufficient support for the event for me to put in on again later this year as near as I can arrange it to last year’s date in November and I’ll email all the original Clubs, plus Bramhall of course, probably during early September.

Hope you all enjoyed yourselves.  Cheers,  Dave

N.B. A special commendation should go to Macclesfield for not only creating excellently alliterative names but for ensuring each one contained a threatened plant and animal – true creativity !