Four Harriers flew south to run in the 20th edition of Transgrancanaria.  We were there for the Advanced (65km/2,800m) and Marathon (43km/1,350m) races.  The objective was to get some good miles in early in the year, in a race that wouldn’t require the usual voluminous kit requirements of UK running in March.  Only problem with that plan is we’ve had the stormiest February I can remember and we still had to train in it.  As it turns out the Peak District in winter was excellent preparation.  Note to self – it isn’t always sunny in the Canaries. 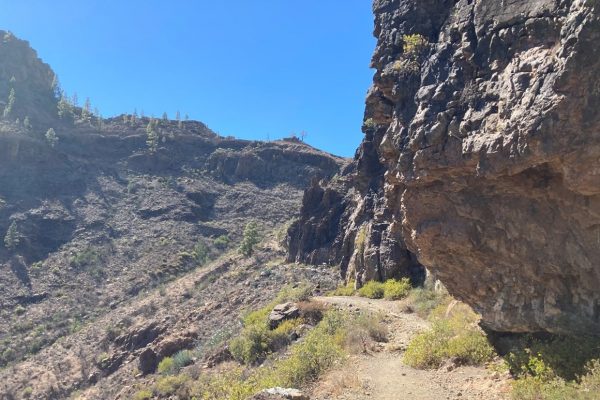 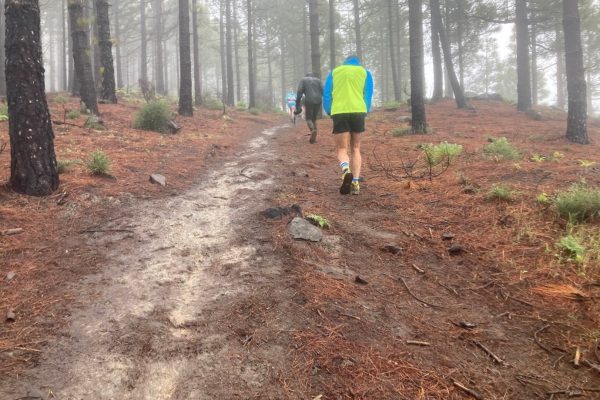 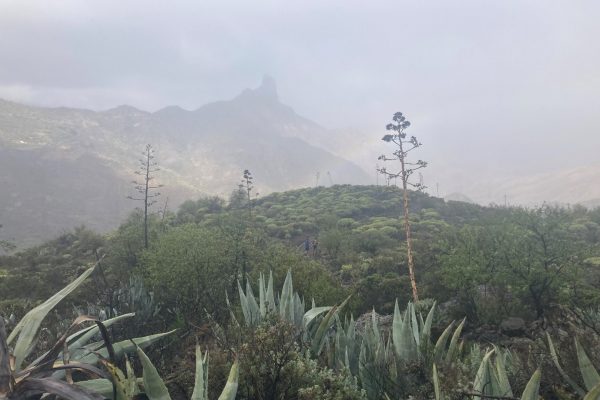 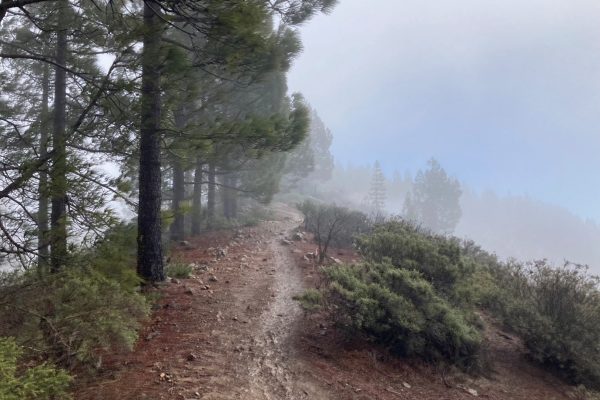 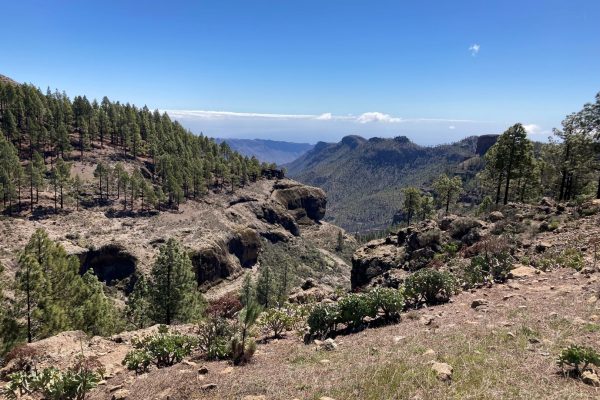 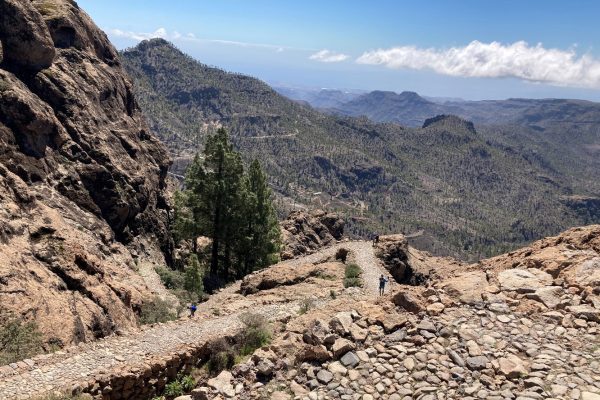 The weather at the start was bleak; Shining Tor in a gale, with thick clag and sleet to boot. Disappointing not to see the scenery, but that would come later.  A quick yomp around the town of Artenara and we were off up a steep alpine trail, where the thin cover of fir trees gave little protection from the severe wind, but at any rate meant that us Northerners could put our heads down and grind out one, then two, then three climbs, each around 700m or so, albeit in weather we were used to.  With a negative elevation profile the descents were even bigger (4,000m downhill).  The first, a mudfest that saw overzealous runners skiing past only to wipe their backsides over wild thyme bushes.  The second and third a deep dive over wet conifer roots and boulders.  Then, just as the battle to retain a comfortable core temperature was almost lost, the fourth climb was summited, the curtains parted, the mountain conceding defeat, tumbling away in front of us. Halfway.

The views were now bewilderingly good, if you could just look up for one second at the risk of stumbling over the chasm.  Quick photo. Then began a long and quad wrenching descent of almost a 1,000m over a hard and technical cobbled donkey track that wove around volcanic towers and giant succulents.  A path used for centuries by Canarian farmers to carry their goods from the fertile highlands to the desert lowlands, but now transporting 2,000 foolhardy runners who were quickly shifting from being glacial and pickled on the outside to arid and baking on the inside.  A temperature inversion of 25C at the flick of a switch. Within a few minutes the course was littered with souls ridding themselves of three layers of clothing and grasping for fluids. 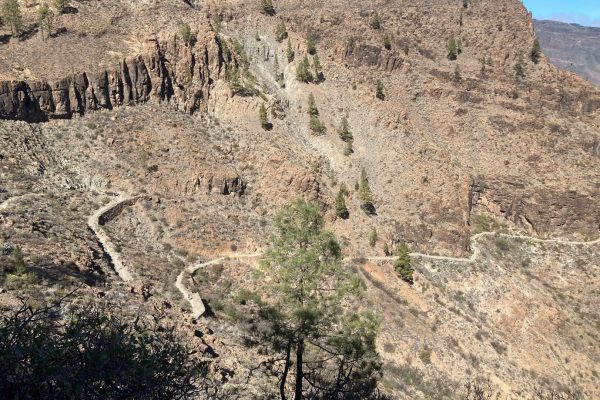 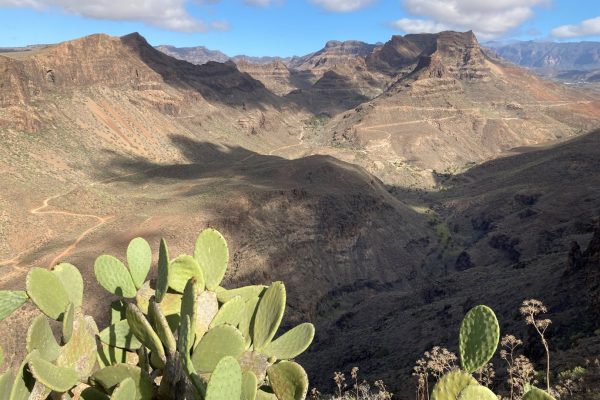 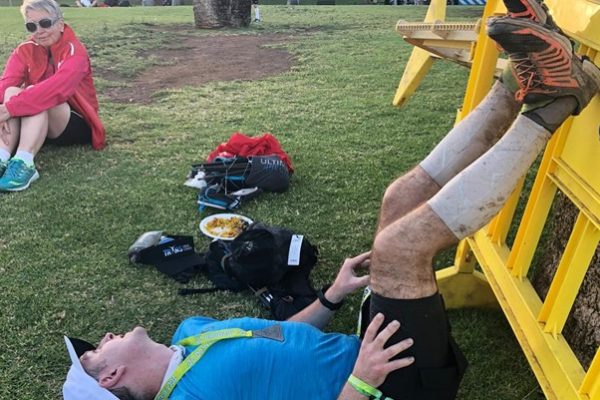 At the bottom of an endless descent, some respite in the village of Tunte where the locals were out in force to cheer and dispense orange segments.  A large tea and cheese on toast and then onwards, where 16miles remained.  Now we were transported to the Wild West, where dusty roads, tall cacti and sandstone cathedrals accompanied us homeward.  Further on and more baffling ancient tracks gouged from cliffs would zig zag back up to a brief plateau of pine forest, before more down, down, down on an endless fast and gnarly trail.  This was the most fun of the day and it felt great, but when we reached that damned lake it was all anyone could muster to deviate from its siren’s call and head on to the end of this odyssey.

Finally, the home straight. Except it wasn’t. 9 further miles of sweltering sand and gravel alluded us; 6 on a broken parched river bed, whose lack of charm and fractured surface ruined the most seasoned ultra-runner.  For me, I was feeling surprisingly peachy and realised that I could break the half hour mark if I really went for it.  So went for it I did.  Somehow, despite several physical protestations and close calls with my ankles I managed to stay upright and lean into the stifling dust that was only occasionally and tauntingly interrupted by the light ocean breeze that would eventually welcome me to a packed finish line in Maspalomas.  God that was hard, but somehow the final determination and lunacy saw me leap frog  several more broken contenders that would make my overall rank something to be proud of.  And I did make it, by a mere 40 seconds – 8hrs29.  Phew – that was close, perhaps I shouldn’t have taken that extra photo! What an awesome day out, but why do they make these medals so bloody heavy? 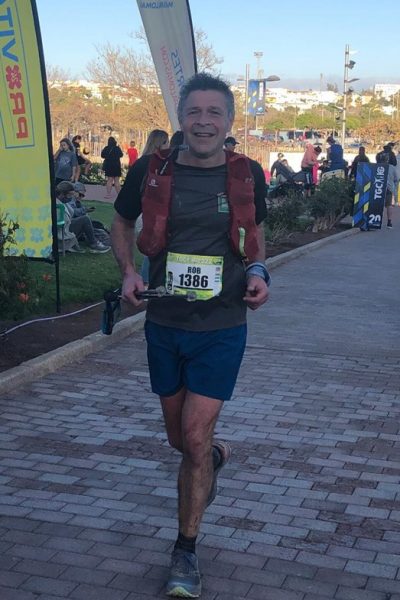 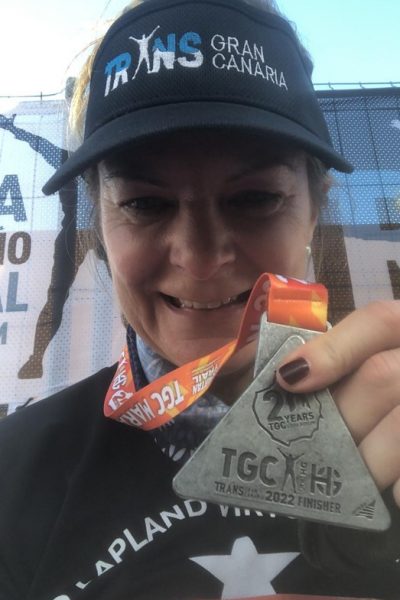