North of England U17, U20 and Senior Indoor T&F Championships

Following the inevitable cancellation of last years Championships, it was great for our athletes to have the opportunity to compete at such a high level of competition at this years Senior, Under 20 and Under 17 Northern Athletics Indoor Championships at the EIS in Sheffield.
Seven Harriers made the trip, six from Cheshire and one, Declan Murray making the journey from Scotland such was his enthusiasm to compete.
To start the weekend’s Saturday session, Callum Wain who primarily trains as a sprinter and Hayden Blunn who is still very much a multi event specialist went head to head in the Under 17 Long Jump. Both performed extremely well with Hayden finishing in 4th with a distance of 5.93m just edging Callum into 5th with a best of 5.88m. Later in the competition Hayden put in a very solid performance in the 60 metre Hurdles to claim his first podium finish of the weekend, winning Silver in 9.01 seconds. Callum turned his attention to the 400m. Winning his heat comfortably in 54.16 seconds. He progressed to the final finishing 5th, improving his time to 53.85 and breaking the club record for the second time in the day.
Following his successes on the track last Season, Albert Bradshaw, stepping up for the first time to the Under 20 age group decided to focus on the 60 metres, a distance he has not previously tackled. A powerful second 30 metres in his heat pushed him into 2nd place, smashing the 19 year old Harriers club record by over 2/10th’s of a second with a mightily impressive 7.23 seconds, a very encouraging start. His consistency saw him produce a 7.25 second run in the final, missing out on the medals but a very promising start in what will be the first of three seasons competing at this age level.
Moving up to the Senior age group, two more members of the Clubs sprints training group both claimed new club records for their efforts. Nick Blore shaved 1/100th of a second of his own PB to run a time of 7.44 seconds in the 60 metres.
David Smith, a relative newcomer to the club, having joined late last year has applied himself incredibly well in training. He hasn’t missed a session and has even turned up when nursing slight niggles such is his commitment to improving. This dedication is already starting to pay off, although critical of his own performance on the day he set a new Senior 400m record time of 54.86 seconds. I am confident that he will better this sooner rather than later. 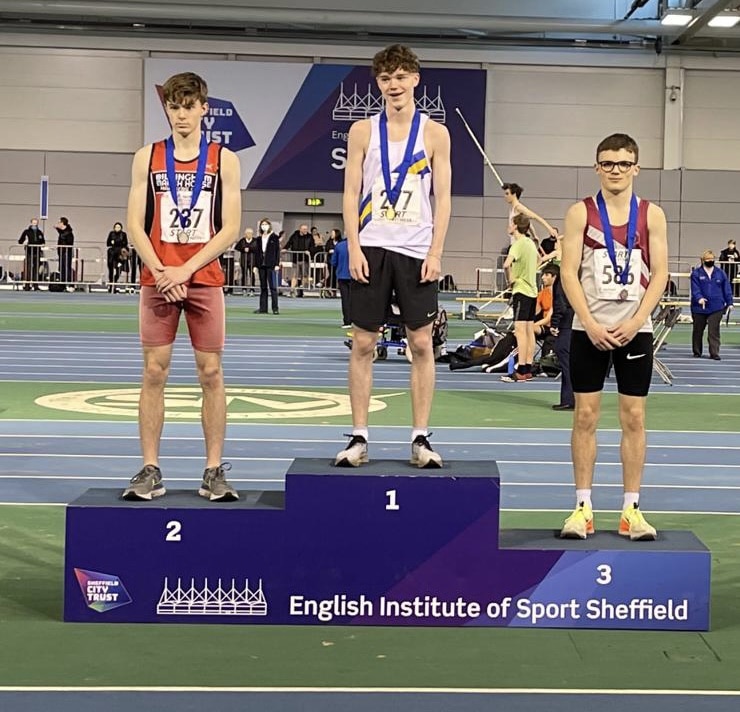 Sunday, alongside Hayden returning to the field events, it was time for the middle distance runners to shine. Philip Goodfellow, Under 17, made his first appearance on the indoor track in the 800m. In a final that saw the difference between Gold and Bronze being just 2/10th of a second Philip finished third in a very tactical race. I’m sure that as he now trains alongside Keely Hodgkinson under the watchful eye of Trevor Painter his race knowledge and all-round ability as an athlete will improve dramatically.
Declan Murray, son of club stalwart Barbara made the long journey south to run in the 3000 metres, no mean feat on a 200m indoor track! The trip was made very much worthwhile though with Declan running a new PB of 9.25.58 setting a new Senior club record for this distance. 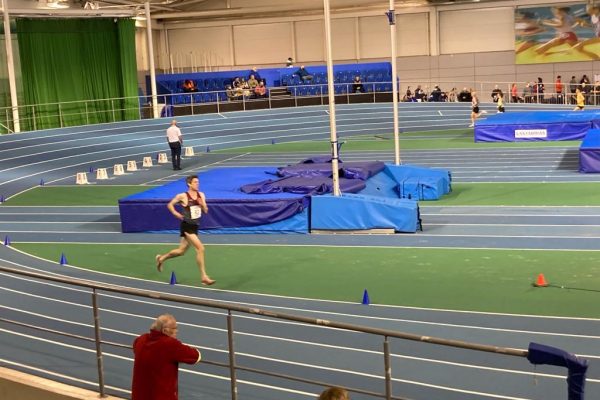 Declan Murray in action in the Senior Men’s 3000m.

Finally to top off what had already been a successful Saturday, Hayden donned his High Jump spikes and claimed his second Silver medal of the weekend clearing a height of 1.75m. Not content with finishing without a Gold medal around his neck he shifted his attention to the Shot Putt. With an enormous distance of 12.29 metres he won the competition by some margin and broke the existing club record by almost 2 metres. A superb all-round effort over the weekend.
For our younger athletes the Under 15 and Under 13 Northern Indoor championships take place at the EIS on Sunday 6th February. We hope the successes of our older athletes might inspire some of you to compete in these extremely well organised competitions. Entry details can be found on the Northern Athletics website. Alternatively speak to your coach who I’m sure will provide you with all the information you may need.