If you’ve ever been to Macclesfield parkrun, Macclesfield Harrier Tim Marsh, will need no introduction. Tim is fundamental to the delivery of parkrun. You will have spotted him carrying out many roles; Run Director, marshaling, handing out finish tokens etc. 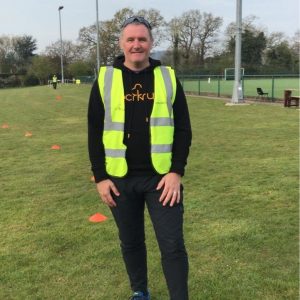 When he’s not volunteering Tim also runs regularly. Over to Tim to tell us his running story;

Q1: When did you start running?
TM: January 2011. I started running as part of my training for The Outlaw, an Iron Distance Triathlon, that was due to take place in Nottingham in July.

Q2: How long have you been a Macclesfield Harrier?
TM: joined Harriers in 2012 after deciding that I was not going to be able to continue to train for triathlons but wanted to continue running.

Q3: What has been your favourite race and why?
TM: Manchester Marathon in 2012. Despite horrendous weather this was my first marathon, not including The Outlaw, and it’s still my marathon PB. 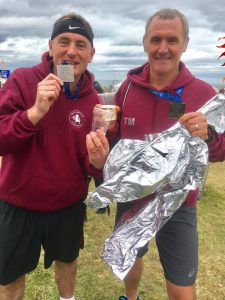 Q4: What’s your favourite running memory?
TM: It probably won’t come as a surprise for me to say that it would have to be parkrun related, and so, although I was volunteering, not running, it has to be the inaugural Macclesfield parkrun. As Co-Event Director and Run Director for the inaugural event it was a really proud moment for me and the team that had established the event. My favourite running memory at parkrun is probably the first time that I volunteered as a Guide Runner for a visually impaired young man who had approached us to see if we could provide him with a guide.

Q5: What does running mean to you?
TM: Running has been the thing that has helped me through some particularly difficult times. Back in 2018, following a restructure at work where I was unsuccessful in a selection process I ended up having some time away from work and was struggling with really low mood and depression. At this time my #RunStreak was one of the positive things that kept me going and gave me something to focus on each day. I ended up completing over 2 years, #742 days to be precise, of running (at least a mile) every day.
I also have to be honest and say that I’m not enjoying running at the moment! In March last year I was running more regularly again and having been injured at the end of 2019 I was just starting to get back some fitness and was planning a year of Parkrun milestones. If it hadn’t been for COVID-19 I would hopefully have made it to 250 parkruns and the coveted green milestone t-shirt!! My motivation started to dip at the end of April and then in May I totally lost my mojo. Without the regular volunteering, running and sense of community that parkrun brings I just stopped and now I am trying to get going again but feel really unfit.
Throughout all of these times, all the ups and downs, it is running and either the club or Parkrun communities that has helped me through and I am looking forward to both club and parkrun activities returning very soon! 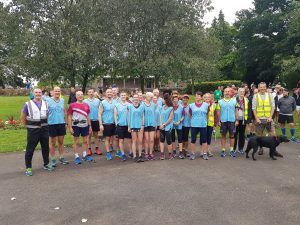 Q6: Do you have a top tip for other runners?
TM: I probably don’t take enough notice of this myself, but I think it’s important to find ways to enjoy your running so make sure that you stay focussed on your own motivation and reasons to run. It’s really important to set realistic goals and expectations and allow yourself to accept that not everything always goes according to plan. There will be good days and there will be less good days and there’ll always be another day!!
Thank you Tim for sharing your running story with us. we’ll see you running or volunteering at Macc parkrun soon!
If you would like to volunteer at Macclesfield parkrun when it returns, please send an email to macclesfield@parkrun.com