Introducing Macclesfield Harrier, Oscar Trevena. Oscar took part in an impressive 24 out of 29 fell races last year! As a result, Oscar won the inaugural Barry Blyth Club Enthusiast award for the person who participated in most Club races in 2019. We’re sure BB would’ve approved! 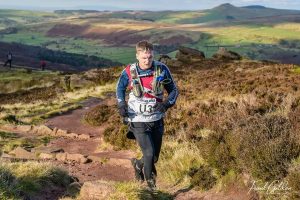 Q1: When did you start running?
OT: In the summer of 2018 I joined a C25K group with work colleagues and tenants from the Rossendale Trust, organised by fellow Harrier Karl Downing. It was actually my boss Sue that put my name down as she was concerned that we were putting on weight sat in an office all day; of particular concern was my reckless consumption of cheese and bacon turnovers from the Coop! Having turned up to the first few sessions on something of a whim I soon realised how much I actually enjoyed running and it motivated me to kick my bad eating habits and strive to get fitter and faster.

Q2: How long have you been a Macclesfield Harrier?
OT: Having completed the C25K I was keen to keep running so Karl suggested joining him on one of the Harriers D group trail runs. I joined Harriers soon after that in late September 2018 and these trail runs became a staple in my running routine and I developed a real love of fell running in particular. 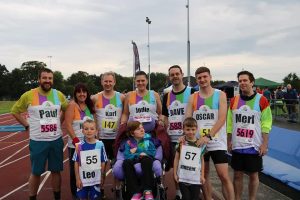 Q3: What has been your favourite race and why?
OT: Really difficult narrowing it down to just one but I’d have to say Stretton Skyline in Church Stretton, Shropshire, although I definitely wouldn’t have said that had you asked me mid race! I had never visited this part of the UK and was blown away by the natural beauty of the surrounding landscape. Also noteworthy that despite being a 19 mile fully marshalled course the race cost just £7 and included a goody bag at the finish line!

Q4: What does running mean to you?
OT: Running has become something of an obsession for me. Nothing beats that dizzy euphoria you get crossing the finish line having gone “eyeballs out” on a race! Then there’s the camaraderie you get having that shared experience of a particularly gruelling run and the banter that follows in the pub over a well earned pint.

Q5: Do you have a top tip for other runners?
OT: Don’t think of yourself as a particular kind of runner. Try things outside your comfort zone, whether that be fell running, cross country or orienteering. There is so much on offer that is of great benefit so give it a go!