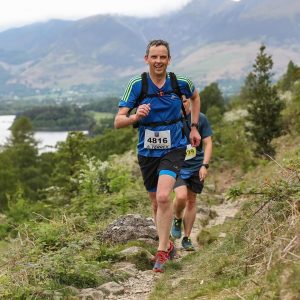 I met Andy on a run following his success and he kindly agreed to set aside some time to share with us a bit more about himself. Over to Andy;

Q1: When did you start running?
AH: I did a bit of orienteering at school and then on and off (mostly off !) in my 20s and 30s. About 10 years ago my eldest daughter, Orla, and I decided we wanted to get fit, so we started running together. We had a little route round Whirley Road and Henbury that we progressively ran more of.

Q2: How long have you been a Macclesfield Harrier?
AH: I joined about three years ago to meet people and explore more of our local area.

Q3:What has been your favourite race and why?
AH: I really enjoy endurance events and those involving navigation. The Bullock Smithy – 56 miles around the Peak District has both. I love the mental battle of keeping going through the night and navigating while your feet are telling you to give up ! There have been lots of adventures over the years with friends who have taken part and all have stories to tell of their day in the hills that keep us going until next year.
Keswick Mountain Festival is really enjoyable too for the sheer number of races and competitors, festival stands and live music in the evening. 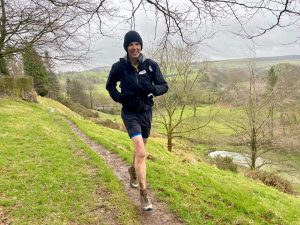 Q4: What’s your favourite running memory?
AH: Finishing the Bullock Smithy with Orla. Hopefully we will get to do it again in September. Also our very first trail run. Orla and I hadn’t been running for very long when we were due to do a sponsored walk for Francis House over Shutlingsloe, Shining Tor and Teggs Nose. A friend of ours decided he was going to run it. We thought he was crazy but gave it a go anyway. We set off early on a beautiful summers day and it felt like we had the place to ourselves. We were hooked!

Q5: What does running mean to you?
AH: Health, fitness, headspace and freedom. After my heart attack two years ago, I really wanted to be active again and being able to run was a big goal for me. I am extremely grateful to the Harriers who have helped me.

Q6: Do you have a top tip for other runners?
AH: It doesn’t matter whether you walk, how far you go or how long it takes. Just enjoy being out.

Thank you to Andy for taking part and for providing some motivation to get us all lacing up our trainers this Easter weekend.