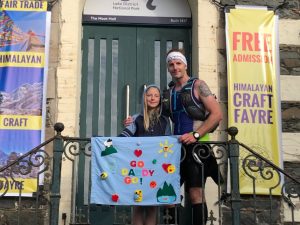 Tom at the end of his Frog Graham

For me there is no greater sense of freedom than the feeling you get as a fell runner when it dawns on you that it is quite possible to drag yourself across a landscape on a direct route of your choosing, not defined by path, through dale, moss, crag, heather terrace and scree. Or so I thought. Add to that the possibility that comes from reaching a course of water and instead of circumnavigating its barrier, forging on and swimming across; now that is incredibly liberating. We’re going on a frog hunt.

The Frog Graham Round was devised as a tongue in cheek nod to the ultimate Lakeland Challenge the Bob Graham (BGR), but with a twist. 40 miles of tough fell running with 4,650m ascent and swims of 3,600m across 4 different lakes, over which it is necessary to carry all of your kit. This requires dragging a ‘tow float’, which is essentially an inflated neon floating bag that your rucksack and kit are stored in, the colour notifying cruise boats not to run you over. On land the deflated buoy folds into your rucksack and off you go. I’d opted for a 14hr schedule, for no other reason than my mate did it in 14:24, but I didn’t really know how long certain sections would take. Complete the Frog and like the Bob you get to join a rather exclusive club. See https://www.froggrahamround.co.uk/ for more info.

I chose to attempt this unsupported, which added to the challenge as kit bags had to be strategically hidden in four valleys with ample food and drink to get me through a long humid day and with no mates to shout abuse at me as I start to wilt over the length of the course or help carry provisions. The Round also required biosecurity plans regarding kit in order to limit the risk of transferring Pygmyweed and blue green algae from Bassenthwaite into Crummock and Buttermere. In my case this meant the first swim in running kit, then a full change into a triathlon skinsuit for the next two swims and a wetsuit stashed on the lower slopes of Cat Bells for the last and longest swim across Derwent Water.

A 4am start from the Moot Hall and just like my BGR I was seen off by some of Keswick’s late night revelers who’d chosen dawn for their walk of shame. I ran torchless in semi darkness up the climb to Skiddaw and as I summited the first peak the glowing sun was already above a cloud inversion over most of the Lake District, with just the highest summits poking through. A lone mountain biker in a bivvy bag on the trig greeted me as my trot past woke him from slumber. Bang on time. Then back down all the way to Bassenthwaite and into the unknown over a lake I’d not previously crossed, but driven past a thousand times. Steph had kindly missed her cornflakes to greet me from the 1km crossing – nice to see a friendly face. Leg 1 done and it wasn’t even 7am. Either the swim had taken much longer than expected, or I had dawdled too long at the changeover – either way I was 35mins off my 14hr schedule already.

Leg 2 heads up Barf, over the tops of Whinlatter Forest and then up the side of Grisedale Pike onto the Coledale Horseshoe, which tops out on Crag Hill at 840m. Its then an eyeballs out descent to Crummock where the scenery really does become quite spectacular as long as you don’t think too much about the big swims, climbs and drops that are about to follow in sweet succession. I finished the second run section in 3hrs46 – just 1 minute off plan, but then a choppy swim and time taken trying to wolf down some baked beans and mashed potato and somehow I was now 50mins down leaving Low Ling Crag. It dawned on me there were two problems with my schedule. First, each swim requires two transitions and not one, which is quite a faff. Second, the bag drop locations were an opportunity to take on some real food so were critical to how I’d feel later on, and that too was taking too long. I reminded myself that this isn’t a race, so to enjoy the day out and not worry too much about the time. Over half way at 11:30am.

Melbreak; what a beast of a climb straight up the vertical face. I mentioned freedom, well it isn’t always without pain. 21 miles in and then a lung busting climb on a 50% gradient, through thick bracken, banks of heather and loose rock. Its followed directly by a 300m descent, then another 550m climb that drags up to Red Pike and then further up still to High Stile, before a very rough scramble and run down to the shores of Buttermere. I’d got lost reccying this part the previous week and had ended up crag-fast in thick clag, but this time I found my way relatively easily. The day was now hot and very humid and I felt really dehydrated, but my stomach was full and aching. Leg 3 of The Frog simply can’t decide whether it wants to rise, or fall, stray on or off difficult terrain, and in the end it spits you out into one of the most beautiful swims in the Lake District. There is possibly no greater view in the land than that from the middle of Buttermere. Once again the running section was pretty much on schedule, but time lost elsewhere. I forced down some rice pudding and coffee and left the valley at 3pm; about 70mins late for the slog up Robinson.

I enjoyed this particular climb immensely. I was after all on the final leg and knew that this 12 mile section would see most of the climb in the first few miles and I was far more familiar with these fells than the other legs. It’s another long steep climb up a well-worn path and I felt bloated and sick, but I wasn’t worried about completing the Round at this stage. In fact I made back time over these fells and could see Keswick for much of it, but it was still another 3 hours before I reached Derwent Water. The last swim is about 1600m and you have to cross three islands. Wetsuit on for this one and thank goodness for its added buoyancy as I think it would have been dangerous without it. The water was pretty rough and ordinarily I wouldn’t venture into it in this condition, but I had no choice but to carry on. I’d always assumed that if I was tired on this section I could do a gentle breaststroke, but with every breathe I was slapped in the face. So I knuckled down to crawl, just lifting my head to keep course. The first island is not much more than a rock and is notorious for the inhospitable seagulls that are known to dive bomb intruders. True to form they rose to fend off my invasion, but instead of swooping me they excreted poo bombs that exploded in the water around me. I touched a tree and retreated unscathed to the relative safety of the incoming surf. The next swim was horrible and the waves tried to drag me down the lake, but I stayed calm and eventually the next two islands were crossed and I reached the far side, the swim complete in 50 minutes with just a short run back into town to finish.

I ran into a packed Keswick and back to the market place after 15hrs14. Running up the steps of the Moot Hall always creates a bit of a scene, particularly on a Friday or Saturday evening and I was greeted by Zow and Daisy waving the BGR banner they’d made in 2019, several groups of imminent BGR contenders/supporters and a lot of bemused onlookers who weren’t quite sure who or what they were clapping. I think I looked a bit of a state with a wetsuit on my lower half and rucksack on upper half, but I was all smiles. It was lovely to have such a reception when you’ve spent the entire day in your own head and suffering over such a long and challenging course. Several people came over to talk to me about it to offer congratulations or ask advice for their own attempts. Ironically M6 traffic would have meant that had I finished earlier my girls would not have been there to greet me in (or buy me a beer), so all’s well.

A great day out and fully recommended*! *if you can cope with the runs, the swims, time on feet, the costume changes and the seagulls.