A band of 30 hardy athletes made the short trip to Crewe for Round 2 of the Cheshire League on Sunday 5th June. Macclesfield finished a creditable 2nd place in the Overall competition against the strong host club, and the U11s finished 3rd overall. Well done teams! Many thanks to David, Anna and Martine for the age group reports and thanks to all officials (who also score points for the team), coaches and team managers for supporting the teams.

U11 Age Group
The U11 boys team consisted of 5 debutants who all embraced the new experience/wet weather and performed great across the events. Luke, Oscar, Toby, Joel and Ethan were happy to fill as many events as possible with many only practising the event once or twice in training previously.
Ethan started the day by convincingly winning the Javelin A string with Oscar coming in second in the B string. Oscar, Joel and Ethan then all gave solid performances in the 150m to secure 3rd, 2nd and 4th in the respective A, B and C string races against some fast sprinters. Toby and Oscar joined a busy 600m start line and performed well in the conditions with Oscar coming in 3rd and Toby 5th. Luke and Joel both secured great distances in the Long Jump with Luke coming in 3rd place out of 12 jumpers.
The day was completed with a great relay victory in the 4x 100m. Some extra last-minute coaching from Rachel and a real team performance was a great end to the day.
Lauren and Samira were our two U11 girls representatives, who made their journey worthwhile by taking on a number of events. Lauren secured 3rd in the A string 600m and javelin along with 3rd B in the long jump. Samira meanwhile tried out the 150m where she gained 3rd A place to match her 3rd in the long jump and 2nd B in the javelin. 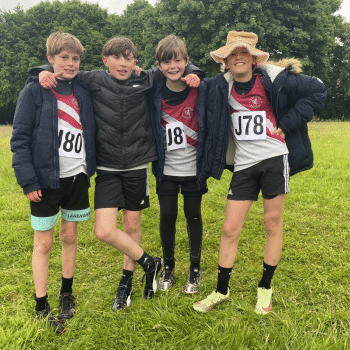 U13 Age Group
For the U13 boys, we had a strong and dedicated team of 6 who braved the rain on Sunday in Crewe and in return, collected a bucketful of first places!
On the track, Tristan and Will came first in the 100m A and B races respectively, with Josh, Samuel and Jake also running great times and getting us those extra points. Bobby and Jake then smashed the 1500m race with 1st and 2nd with Bobby hitting a new PB and Jake matching his current PB.
Over to the field and Tristan and Will took 2 firsts again in the long jump (A and B string), with Tristan also taking the top Male/Throw performance of the day in the Javelin with a brilliant throw of 31.04m (again winning the A string) with Samuel getting 2nd in the B string with 12.19m.
Finally, onto the relay where the U13 Crewe and Nantwich girls team were a force to be reckoned with! However, the boys pulled it out of the bag and pipped them at the line to take another first position (by 1 tenth of a second!!). Well done to
Thanks again to all the athletes for coming on the day and braving the rain.
Holly Walker was our single U13G and did well, setting a PB mark with a 4th place in the A string 200m. Well done Holly!

U15 Age Group
Flaming June it was not, but despite being possibly the wettest day since Noah built the Ark there was no dampening the spirits and skills of our under 15 girl heroines.
First event was long jump with Beth and Grace who began our haul of point gathering for the day, a PB for Beth and more great points gained by Grace.
Next was the 2oom Sprint with impressive runs by all 3 of our girls, Corinna, Lizzie and Eliza who fought hard to achieve brilliant positions against stiff opposition topping up our points haul handsomely.
Over at Javelin the Knuckey sisters displayed their skill. Marianne achieving 1st position and Corinna achieving her PB.
Finally the 4x100m Relay, outstanding sprints on each leg. Although it was still raining, Corinna, Beth, Eliza and Lizzie really did run like the wind and came in in an impressive 2nd position which left us in 2nd overall for the day.
U15 boys were represented by Jake and Matthew in the 800m, with Jake finishing strongly winning the A string, and Matthew taking second in the B string. Hopefully we will have more boys to support them at the next event at Macclesfield on July 3rd.

U17s and Seniors
It was great to see Callum Wain and Thomas Danson in the U17M group enjoying their athletics at Crewe. Callum ran strongly for the win in the A string 200m and likewise Thomas had a good fast run to take the B string win. They then moved over to LJ for a repeat performance, this time with Thomas winning the A string and Callum the B. Likewise our sole U17W, Emma Johnson had a good day winning the 800m and competing in her first High Jump competition for the club – well done Emma. Senior Ladies were to the fore in the 800m with Faye Sharpley taking the A string win and Sue Stockdale the B string win. Sue had already finished first lady in the 3000m and went on to take 2nd in the A shot for good measure. Hilary West took 3rd in a fast 200m race and 2nd in the B shot. For the senior men, our two representatives were Mark Walker and Ashley Pritchard who took 1st in the 1500m and 2nd in the shot respectively.