15 Harriers turned up at Loweswater village hall for the Darren Holloway memorial Buttermere Round.  The ‘Short’ race at 21km and 1500m circumnavigates the fells on each side of Crummock Water, is a fair reckoning of any fell runner’s mettle.  Navigation is not overly complicated, not least due to the volume of runners on the first group of fells and then the decent paths on the second, though fair weather is still a significant bonus.  The ‘Long’ adds in the loop around the Buttermere fells and comes in at 36km and 2,500m climb (though I measured is at 3,000m and didn’t add in any extra mountains as far as I know). Two races – one AL and one AbloodyL.

That’s what it’s all about in the High Fell Series. Something for everyone and in particular, a majority of races that the less seasoned fell runners can have a crack at. And have a crack they did.  On the short course 6 out of 7 runners took home a prize, which is a fantastic result.  Rachel Munday first V40 and then both team prizes (Rachel, Kerry Riley and Andrea Frost for the ladies and Dan Croft, Richard Applewhite and Bernard McCarron for the men). In the long race, Allen Bunyan came a very respectable 14th and a quick shout out to Barrie Thomason who shaved 45minutes off last years’ time.  Well done all! 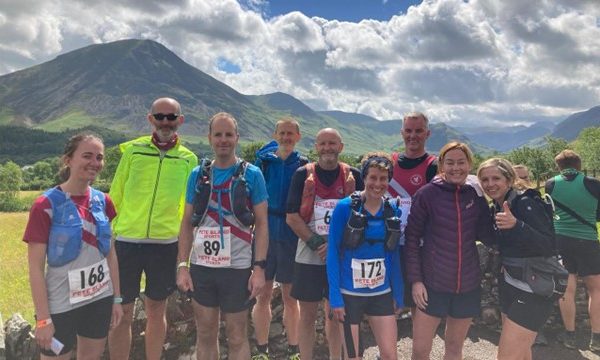 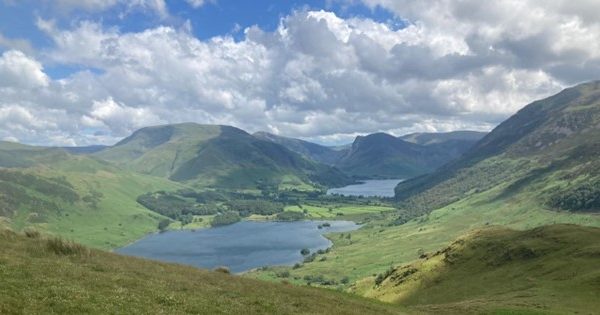 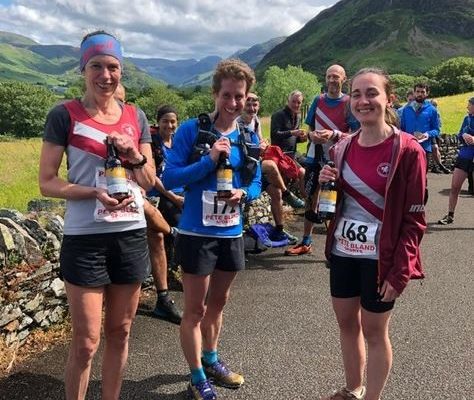 Felt very grateful to carshare with Mark, Matt and Andy on the way up – a kind walk through the route and its’ Pit Falls – if Mark was coming back to banish the ghosts of navigational mishaps, then I was lucky not to be doing the Long.  Furious rifling with shaking hands in the buzzy hall.  Precisely rolled Kit-tens stuffed back in like tarpaulin in the storm.  Mark had stated that the rain fells only on the Northern plane and those on the short route would therefore skirt it in a Victoria bustle.   Lovely to see all the friendly faces outside – time to empty the mind of any final troubles lest they haunt you at checkpoint 4 – turn sharp left lest you carry on for 20; should I go over Robinson or follow its fine contours, like the creases of Dale’s sweet head.

All together, happy chatter turns to puffing up the first ascent – a line of Jason’s argonauts with a gong to set the rhythm, I need my golden fleece – one foot behind the others; more insistent gusts and a light precipitation; is the jacket at the bottom, under the trousers and whistle or to the left of the hip flask with a pipe that did not fit?  Over the top, down and up stream – an oily herringbone. Across the top and lovely to see Rebecca kindly cheering us – a conversion of Harriers at the checkpoint – so proud to see so many and be part of them – going the other way on the out and backbone.

A rocky landing to Buttermere – do you know what to do at Buttermere? Which hill to go up? Thank God for the 2 gents, yellow vest and yellow banana – I will stick to them like the finest Turkey basting.  The field has surely spread out now like the Flora.  I must keep up at all costs.  Bumping across the rocky flats through some tourists – like wild Jasmine in Paris.

The final ascent looms menacingly and welcomingly beaconing – pulling up with the chicken wire fence, it needed more basting. Only 3 gents in sigh-t now.  Keep up by Christ. The final checkpoint – 2 happy, kind marshals – is it only 2 miles to go please? Not sure love, it took us an hour to get up.

The final descent – I can hear the Ski Sunday music as I slalom gracefully down, cowbells sounding – udderly butterly.  As I snap out of the hayze, I see bracken and loose camber trods.  Please may I stay with you Sir? He’s gone down that way – what shall we do? Following the only other human in sight, contouring it, contouring it – to hill with it we thought, let’s get down it.  Bumping down through the bracken, like the bull in the fine bone shop. The final path – everything in the tin, dragging it out of the can, months in the pain cave – hours in the butter churn.

Friendly face of lady who I’d seen throughout coming down looking fresh as a daisy – let’s get it done – we’ve done really well she said! We have – we have! 🙂.   Into the peaceful village, a kind lady walker cheering us on, past the old church, 3 hymn sheets to the wind.

The Dibber can wrestle in peace.  The welcoming group of happy harriers – butter cups brimming with Mearth.

Hobbling in to find my changing bag, a wonderful sigh-t to behold, all senses already on high alert from the goings on, a vision like Willy Wonka’s factory itself – every manner of cake from custard filled shoe horns, buttermerefly buns to a date with a flapping jack.  Immediately then, a whiff of steamy pastry, an oven fired up for hours (that’s my Sole in there).  Lakeland pies in a wooden bowl – I imagined Peter Rab-bit himself when he saw those delights.  Mrs Tiggy Winkle herself at the oven.   Such a kind family, asking us to fill our very boots with the cakes and pies – Darren  Holloway’s lovely wife explained that he would be so happy to see us all there with the cakes as when he used to come back from fell races, he always brought them a cake – a warm, buttery toast to you all. 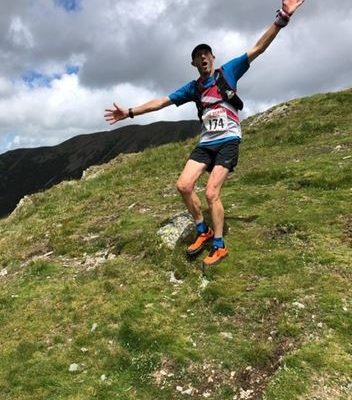 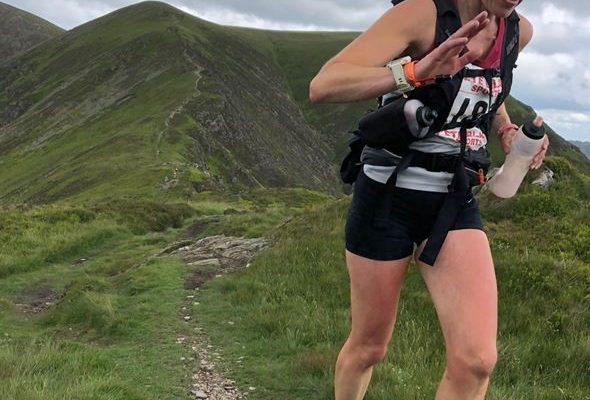 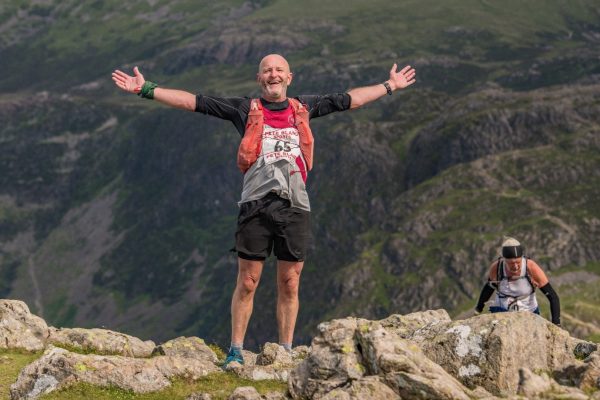 I stepped onto the start line with some trepidation. Three weeks earlier I fell arse over hand and knee, which was unnecessarily dramatic during race season.  As it was recovery comes swiftly for those that avoid races for a few weeks and aid the healing process by indulging in a little extra pie and goblets of red wine.  I was actually more worried about my sprained thumb, which is a surprisingly important appendage on a race like Buttermere.  It’s a weird joint because some movement is fine and some not so.  Thus I was able to use it for scrambling, but had the race gone badly and I’d needed it to hitch a ride back from Honister…  Ouch.

Anyway, I digress.  I succumbed to the longer race and am glad I did, but where had my climbing legs gone? Its only three weeks, surely not much more than a cliff edged taper.  As usual I gave more to the first climb than was warranted and probably paid for it later.  A few cheeky lines aided the course, but what’s this? Everyone is traversing Sand Hill and running over scree.  Don’t get much of that underfoot in the Goyt.  Up and over Grasmoor, which is kinder underfoot, before the deep dive over Whiteless Pike to Newlands.  I saw Rebecca too, or heard her yell my name as I leapt (crept) into the void, but could barely take my eyes off the pathless bank lest I lose footing.  This is as steep as it gets and with a fine covering of bilberry bushes on the upper slopes very little for your shoes to purchase. Damn it why didn’t I wear mudclaws? Lean forwards!

My descending over rough ground continues to disappoint and on each big descent I lost places, only to regain them on the next climb.  I have to conclude that I have one gear – good on climbs, steady on flat, slow on descents.  Instead, I have to rely on good lines.  But where are they? Leaving Newlands Hause I was quickly on my own having opted for a direct route that goes steeply over a grassy crag, through a large bog via some good sheep trods and then skirting around Robinson from a high level.  At one point I looked south and saw an ant column of racers far below going much wider. Take your pick, save 80m of climb at the expense of 700m distance, or take the more direct line. Each to their own and on this occasion I gained a few places when our courses remerged before the climb to Dale Head.

I was starting to feel a bit wobbly leaving Honister.  Time to eat some rice pudding.  It’s about halfway in miles, but the terrain in the second half is definitely tougher once you get passed the miners track before Wainwright’s favourite hill Haystacks and there are lots of ways you can shave time if you’re on the ball.  My attention was maintained for the next few hours with the arrival of a couple of familiar faces who were clearly faster than me but determined to stick to the tourist path.  I like to think I frustrated the hell out of them as they rounded a corner only to see I’d regained my place. “You again?!” Small pleasures and possibly a little sadistic.  They may not have even noticed – a lot of Macc Harriers out today. To be fair I did make several blunders that I had to work hard to reverse, but all in all I was happy with the nav.

One short and very heavy rain shower to cool the blood as I climbed High Crag, a cruel and unforgivingly steep ascent with a gnarly endless wide ridge to High Stile, with fabulous views to Buttermere if you can afford to look away from trip hazards.  An easy crossing to the flanks of Red Pike before endless choices down towards Scale Force.  The best line before the last climb requires a measure of faith – turn left off the main path at 350m, a steep camber clutching at heathery roots and scraping the skin off tired legs, holding nerve that this is the right course, and then after a few hundred meters of pathless uncertainty a trod appears that takes you right down to the col before Mellbreak.  Believe me, a 40m shorter ascent at this stage is very welcome.  Last climb. Piece of cake. Christmas cake as it happens – the magic ingredient and my secret weapon.  Three places taken, bravado or stupidity.  Feels like the latter when my last cunning shortcut bounding over mossy tussocks is called to a halt by impending cramp and I reach the path barely ahead of my opponents.  The longer more runnable route choice at this stage on the last 2 mile stretch. Past the pub and then which way?  My biggest navigational blunder of the day meaning I turn right not left and add 400m to my finish, losing 2 race positions and requiring a steep jog-of-shame up the last bit of road to the finish as I pass runners on the way back to their cars. They know what I’ve done. I reward myself with two pies. 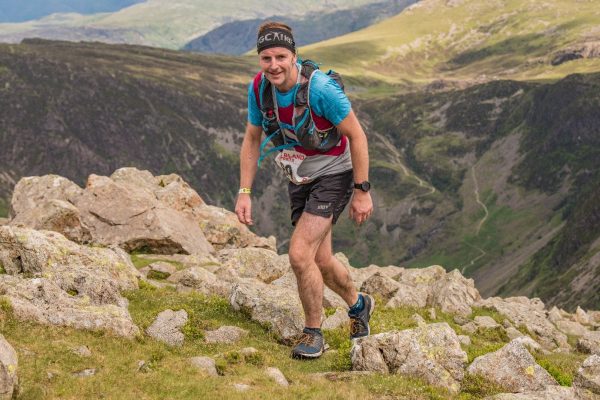 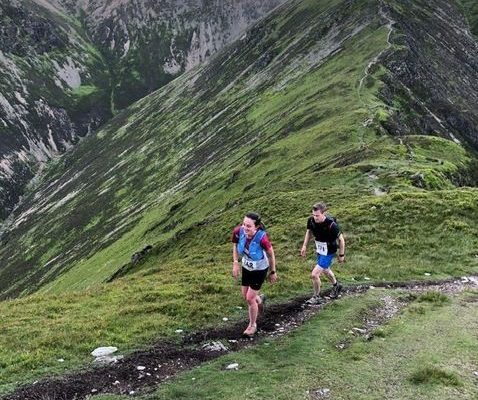 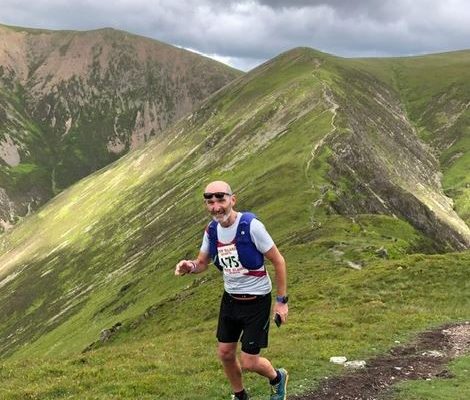 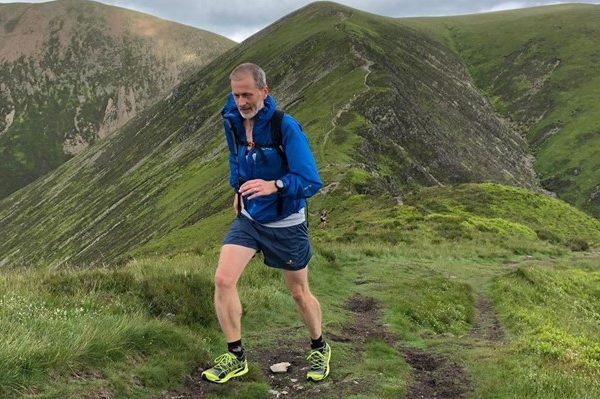 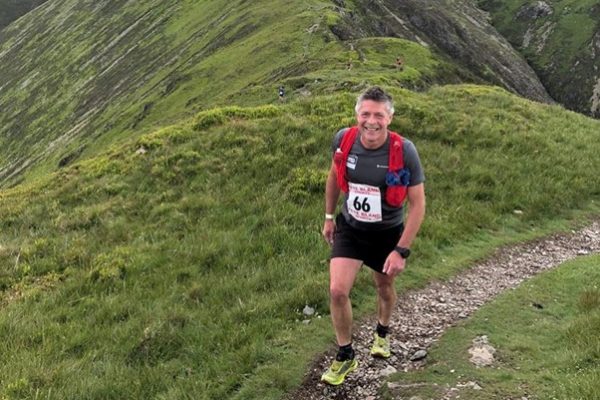 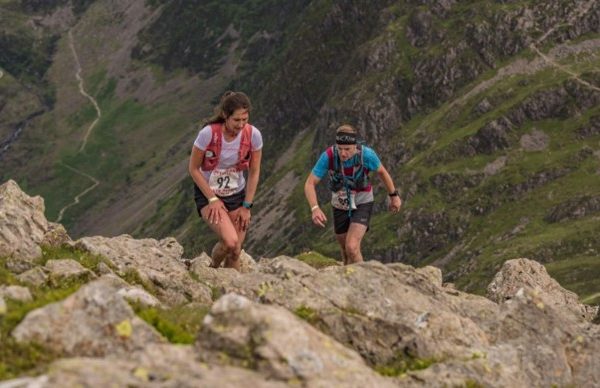 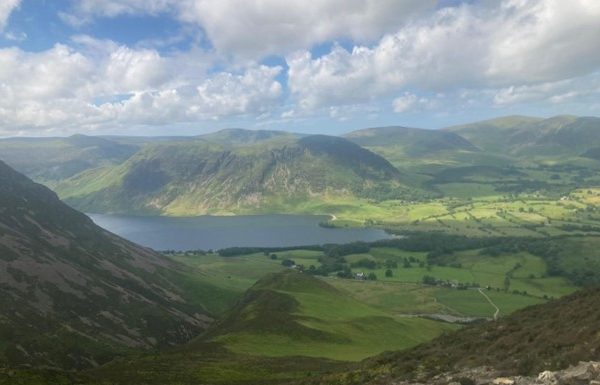 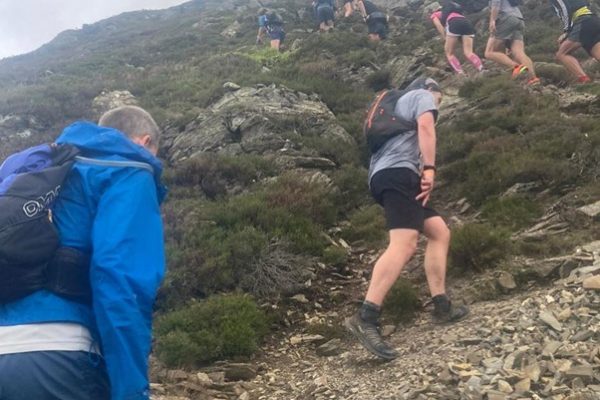 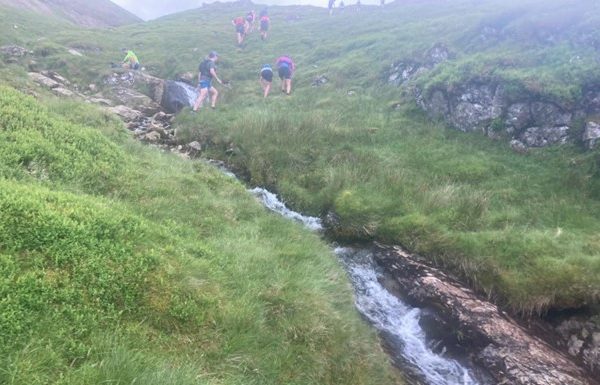 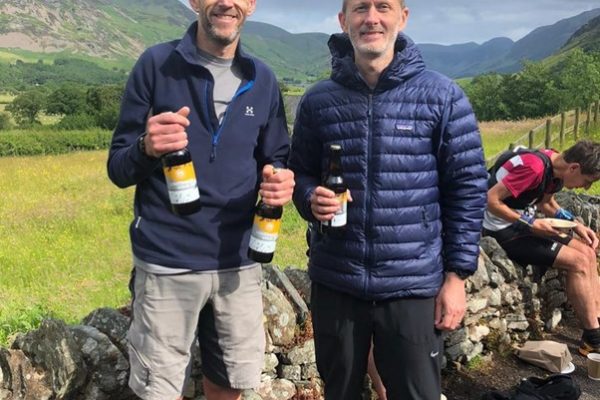